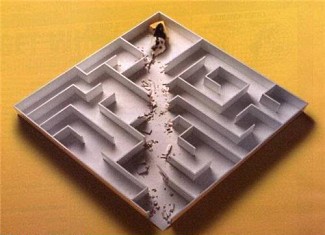 Screw it. I want that cheese NOW.

So the villain is feeling quite secure in their dungeon/castle/tower/fun house/generic headquarters. The path to their location is filled with a maze of twisty little passages, all alike, each filled with death traps and Elite Mooks that would quickly kill the protagonists, or at least inconvenience them by a lot and let the villain escape if they need to.

... but the heroes just fly up to the top of the tower where they are. Or blast a shortcut to their place (not coincidentally, blasting the villain in the process as well). Or enter an overlooked route. All that dungeon preparation? Wasted. If the villain hasn't been taken out yet, they might complain about how these things were supposed to go.

Makes players of RPGs, Action Adventure, and other such games with dungeons wish they could do something as easy. Occasionally, they can, though it usually isn't intentional. This usually results in Sequence Breaking.

Heroes that find another way to get past a maze may also count. Basically, the Dungeon Bypass is where the hero takes a shortcut instead of whatever the intended path was (possibly exploiting Myopic Architecture in the process). If used in combat, this can be in some contexts a case of Fighting Dirty. This is a Sub-Trope of Fake Skill.

Inversion: In many Tower Defence games, it's the enemies who use this on you! Airborne Mooks will fly over your maze of towers, unlike other mooks who will have to traverse it while getting the stuffing blasted out of them on the way.

Compare Take a Third Option (any generic option of going along an unintended route), Cutting the Knot (for making the shortcut), and Easy Level Trick (pulling this stunt on any sort of level in a video game).

Examples of Dungeon Bypass include:

Retrieved from "https://allthetropes.org/w/index.php?title=Dungeon_Bypass&oldid=1893451"
Categories:
Cookies help us deliver our services. By using our services, you agree to our use of cookies.