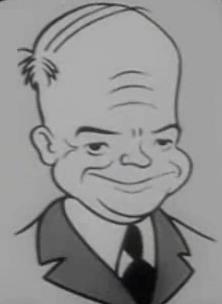 Who doesn't like Ike? (Answer: Adlai Stevenson and Meta Knight.)

Dwight David Eisenhower was given this name by his mom, hoping nobody would make a nickname for him. As you may have noted, it didn't work, he ended up being known as "Ike". He was President from 1953 to 1961, being the first President to be barred from running for the office again via the 22nd Amendment (he was opposed to that amendment).

Ike had gotten into the White House by virtue of his major role in winning World War II as the head of the Allied Forces and masterminding D-Day (he wasn't sure that would succeed and actually had a speech ready in case it failed). He ended up a five-star general, although had to stand down from the Army to become President (when he left, he got the position back). During WWII, he was one of the few to actually see the concentration camps in Germany and on that wrote "We are told the American soldier does not know what he is fighting for. Now, at least, he will know what he is fighting against."

He was courted by both major parties in 1948, but declined to run. He was "drafted" by Republicans in 1952 and won the general election in a ten-point victory and Electoral College landslide. His campaign slogan was "I Like Ike", which was meant to be worn on buttons and bumper stickers to show support. The unpopular and sour-faced Richard Nixon became his VP.

Under his presidency, the US Interstate Highway system was authorized and Ike made defense a priority, especially Superior Firepower. There was also quite a bit of stuff in Latin America (much of it unsavory). The CIA also undertook an operation to overthrow the democratically-elected Prime Minister of Iran; this backfired rather spectacularly just over 20 years later.

The Civil Rights Movement got seriously going with Brown v. the Board of Education of Topeka. Ike supported that decision, desegregated DC schools (per Bolling v. Sharpe) on the spot and would later send down the 101st Airborne Division to enforce the inclusion of black students in the high school at Little Rock, Arkansas.

Ike appointed five Supreme Court Justices, most famously Earl Warren. Warren was expected to be a conservative, but turned out to be very liberal indeed (although Eisenhower's comment about it being his biggest mistake may be apocryphal).

Ike died in 1969. He was seen for a while as a "do-nothing" President (wait, didn't he end The Korean War?[1]), but historians now often place him in the top 10. He was very much a non-partisan kind of guy and probably the most moderate president of the last century.

He has an aircraft carrier named after him, and his place of meditation at his grave in Kansas is really cool. He changed the name of the presidential retreat from "Shangri-La" to "Camp David" in honor of his grandson.

Mike: It's getting like politics in America is only for the rich!
Archie: Who's been feeding you that Commie crapola?
Mike: President Eisenhower said that.
Archie: He did not! Eisenhower was a great president who never said nothin'!

Brak: Brak's my name and that's what it is!