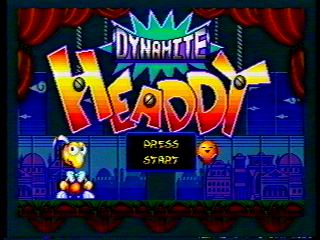 Dynamite Headdy is a Platform Game by Treasure with the unique feature of taking place in and behind the scenes of a puppet show. You control Headdy, a puppet with a detachable head that can be used as a projectile, on a mission to confront Dark Demon, a Big Bad who has, quite literally, stolen the show. On your way you meet helpers such as Hangman, an animate handhold; Headcase, a walking box with a rotating selection of power-up heads inside; Beau, a visitor from Fluffy Cloud Heaven who points out bosses' weak points; and Heather, a mysterious woman with detachable hands.

The puppet show nature of the game's setting comes up quite a bit, although it also has elements of a live action play or a movie. Each stage of the game is called an Act, and is subdivided into sections called Scenes. Backgrounds are often missing sections through which the backstage area can be seen, and sometimes actually fall apart. Some sections of the game take place backstage, and enemies and NPCs both sometimes take on the role of stagehands or other staff. Even the Life Meter reflects this: Headdy's vitality is represented by a spotlight whose color (and the size of the "H" in the middle) corresponds to the amount of life left, and bosses have a similar spotlight with an "E" in the center. There's also a scene where an orchestra is visible in the background playing the background music. Needless to say, metafictional and setting tropes get quite a workout in this game.

Tropes used in Dynamite Headdy include:

"Gwahaha! That scene was a huge success! Regrettably, we haven't prepared the next scenario yet, but it'll be even more spectacular... ...maybe something like completely blowing up the puppet world!! Heady, my boy... I'll have you desperately fighting for your life again next time! Gahaha!"