Everything About Fiction You Never Wanted to Know.
(Redirected from EPICMEALTIME)
Jump to navigation Jump to search 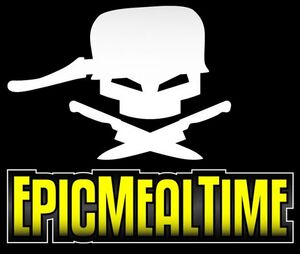 So a Montreal high school substitute teacher and his friends decided one day to put a ton of fast food items onto a pizza shell, cover that in cheese and cook it. Then, surprisingly, it got hits. Now, they've turned their gluttony into a weekly series devoted to the most high-calorie and fattening dishes imaginable: Epic Meal Time. The show started in October 2010 and is still ongoing, with new episodes every Tuesday.

With the audacity to call themselves an "online cooking show", the first efforts soon expanded into meat sculptures, questionable uses of bacon, "meat glue", bacon and five birds in a pig - and bacon.

Their YouTube channel is at EpicMealTime. They have made an appearance on Jay Leno, where they made a shepherd's pie that was also a car.

Tropes used in Epic Meal Time include:
Retrieved from "https://allthetropes.org/w/index.php?title=Epic_Meal_Time&oldid=1545968"
Categories:
Cookies help us deliver our services. By using our services, you agree to our use of cookies.