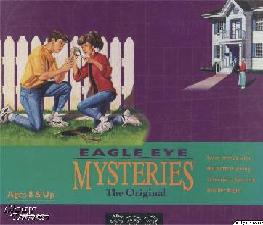 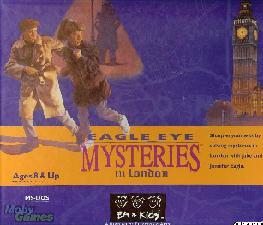 Eagle Eye Mysteries is a two-part Edutainment Game series developed by Stormfront Studios (now defunct as of 2008) and published by the Creative Wonders (EA*Kids) studio. It was released for the PC and Apple Macintosh computers and playable on DOS, as a first-person detective game involving reading, puzzle-solving, and much research on the part of the player. The series is for players aged 8 and up, which means adults can get in on the fun as well.

The premise: Pre-teen twin siblings Jake and Jennifer Eagle are the founders of the Eagle Eye Detective Agency, which is based out of their hometown of Richview, USA (it's never stated where exactly the town is situated). In the first game, they solve mysteries that take place in and around Richview and that involve their friends, neighbors, and other close residents. In the sequel, the two go on vacation to visit their Aunt Miranda, Uncle Basil and cousin Nigel (also Eagles themselves) in London, England, hoping to take a break from sleuthing...only to find mysteries waiting for them in London and its environs. You, as the player, are a member of the Agency who can partner with either of the siblings to solve cases, collect clues and help the police collar criminals.

In-game, Jake and Jennifer use a hand-held electronic notebook called a TRAVIS (short for Text Retrieval And Video Input System), which can store notes and photos of suspects or other pictures for easy reference later when going through clues to solve the mystery. According to the game manual, they also adhere to a strict series of rules that govern mystery-solving, allowing them (and you) to better sift through clues, identify the ones that are most relevant to the case, and thus correctly identify the guilty party.

Each game begins with a practice mystery that the player can access to get a feel of how gameplay works. In EEM London, when you start playing for the first time, you're immediately launched into the practice mystery, as it sets the pace for the game's underlying Story Arc, where the kids will have to match wits with an elusive criminal known only as Macavity.

The mysteries are separated into "books," each containing roughly 25 mysteries. In EEM Original, there are three books, Book 1, Book 2, and a "Challenge Book." The cases in Books 1 and 2 have the same names, but those in Book 2 are only slightly more difficult, have different clues and come with different outcomes. The Challenge Book contains only six mysteries, all having the same names as their namesake cases in Books 1 and 2, but with significantly higher difficulty.

In EEM London, there are two books, with the cases in Book 1 being very different from those in Book 2 and with approximately the same level of difficulty across all the cases. (On a side note, both books in EEM London contain exactly 25 cases, which means you get to solve 50 mysteries in all - not counting the introductory mystery that you get when you first start playing the game.)

Its character sheet is complete (for now). Also has several other sub-pages, listed at the top of the article.

Tropes in Both Games