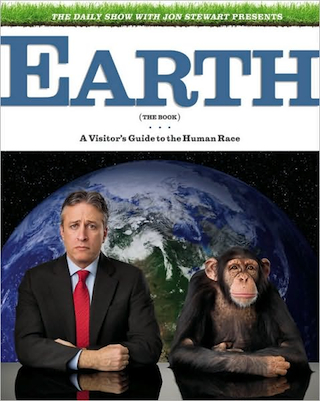 Why WOULDN'T you want to buy a book with a monkey on the cover?

"Earth (The Book) is a 2010 humor parody satire book written by the authors of the popular television program The John Daly Show."
—Wikipedia[1]

The Spiritual Successor to America (The Book): A Citizen's Guide to Democracy Inaction, Earth (The Book): A Visitor's Guide to the Human Race is a Satire, Parody, Pastiche of high-school textbooks designed as a record for any alien visitors who may visit Earth After the End and wonder exactly what the creatures who used to inhabit this planet were actually like, as written by the writers of The Daily Show.

Tropes used in Earth (The Book) include:

"A shameless scam that passes off meaningless drivel as timeless wisdom in a brazen attempt to wrest money from the vulnerable and ill-informed. Two thumbs up!"

As our larynxes descended, we were able to make sounds with our mouths in new and far more expressive ways. Verbal language soon overtook physical gesturing as the primary means of communication for all human beings except Italians.

You may not shoot members of the Red Cross (not even a little), nor prevent them from inspecting your prisons, nor touch their property, nor leave live hand grenades in their medical kits, nor get fresh with their nurses, nor fling dead rats at them for a laugh, nor...look, just stay the fuck away from the Red Cross, OK? Who do you think wrote this thing?