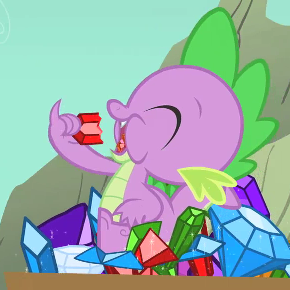 "I am one of the gorons, the stone-eating people who live on Death Mountain."
—A goron from The Legend of Zelda Ocarina of Time

Remember that old joke about two people deciding which restaurant to go to?

Alice: I know a place where we can eat dirt cheap.
Bob: But who wants to eat dirt?

Well, these guys do, apparently.

There's a tendency in fantasy to have certain species or characters, especially stone-based ones, eat earthen materials. Often, this extends to having their entire diet consists of these things, and they're unable to digest pure organic matter. Analogies to actual human food may be drawn as well: nitrogen-rich soil may be especially tasty, for instance. Gemstones may be considered rare delicacies or quartz may clog arteries.

How they get their nutrition from eating such materials is never explained, but presumably, if they're different enough to find rocks tasty, their nutritional needs are far different from ours.

Examples of Eat Dirt Cheap include: