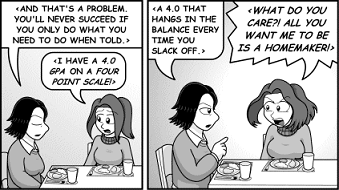 "The first day of kindergarten, I watched all the parents say 'have fun!' when dropping off their kids for the first time. My mom said to me, 'Alan. Today is the first day of school. You will do well. Go to Harvard. Become good doctor. Make money.'"
—Stuff Asian People Like

The diametric opposite of the Open-Minded Parent is the Education Mama, a mother (and it's usually a mother) who is obsessed with her children's education and pushes them to succeed academically, no matter the cost. She will shell out thousands of dollars to send her kids to private school or move to another town with good schools, and her kids will be forced to surrender their social lives in the pursuit of good grades. And God help her kids if any of them gets anything less than a B. This trope is especially pervasive in East Asian families, to the point where it's become a stereotype that all Asian parents are like this. Such parents have been given the name "Tiger Moms."

Contrast: Parental Abandonment, Open-Minded Parent. Compare: Jewish Mother. Can turn your child into a "Well Done, Son" Guy if all goes according to plan. If it goes pear-shaped, it can lead to a You Are Grounded moment, or worse still, teen angst or teen rebellion. In the worst cases, particularly in East Asia, the end result is attempted suicide, the Hikikomori, or even snap violence against the parents.

The Stage Mom is when this trope is applied to performing arts instead of academics.

Not to be confused with Cooking Mama.

Examples of Education Mama include:

"Dad, it's just one point."
"One point away from a perfect score!"

When Western parents think they're being strict, they usually don't come close to being Chinese mothers. For example, my Western friends who consider themselves strict make their children practice their instruments thirty minutes every day. An hour at most. For a Chinese mother, the first hour is the easy part. It's hours two and three that get tough.