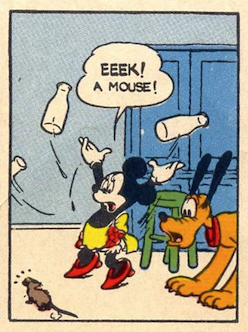 "Mice to me mean the little white furry things with the cheese fixation and women standing screaming on tables in early Sixties sitcoms..."
—Arthur Dent, The Hitchhiker's Guide to the Galaxy

A staple of early domestic comedies in both film and television. The mere sight of a mouse (or sometimes another animal who is the subject of a common phobia) will drive a housewife up onto a chair or a table, where she stands shrieking, stomping her feet, and clutching the hem of her skirt until the rodent is captured or driven away. This is largely a Dead Horse Trope today, rooted in a very specific and sexist image of women dating back to the early part of the 20th Century, but it is still visible in old Looney Tunes cartoons and in the odd ironic reference.

Looney Tunes cartoons will sometimes play with this trope by crossing it with the old myth (deemed plausible by the MythBusters) about mice frightening elephants, resulting in elephants that shriek and leap up onto some (possibly insufficiently-strong) object upon sighting a mouse.

See also Cower Power and Why Did It Have to Be Snakes?.

Examples of Eek! A Mouse! include: