Ef: A Fairy Tale of the Two.

Everything About Fiction You Never Wanted to Know.
(Redirected from Ef a Tale of Memories)
Jump to navigation Jump to search 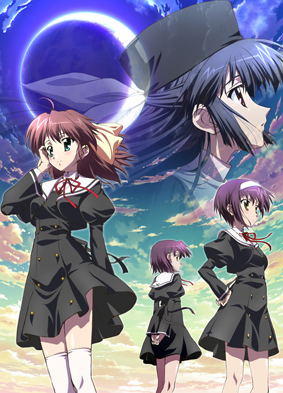 Do you have memories you don't want to forget?

The story, as in the first chapters: While going to a Christmas party, Hiro Hirono meets Miyako Miyamura, who steals his bike to chase a purse thief. They decide to hang out together and soon grow fond of each other. Renji Aso meets Chihiro Shindo at the abandoned train station where he likes to hang out after school. He is intrigued by the girl with the eye patch but finds out that she harbors a sad secret. Meanwhile Kyosuke Tsutsumi, an aspiring young film maker, is taken by the appearance of Hiro's Patient Childhood Love Interest, Kei--Chihiro's twin sister who herself is in love with Hiro.

ef: A Tale of Memories was released in 2007 and is the an adaptation of the the first game and one third of the second game. It was produced by Shaft and directed by Shin Ounuma, who volunteered for the job. Of special note are the illustrations at the end of each episode, which are made by various anime and manga artists. Sentai Filmworks is distributing it in North America; it is available on the Anime Network's Online Player.

A combined standalone English release of both games is now available from No Name Losers, who are also known for their localization of an earlier game from minori (Wind ~a breath of heart~). A commercial re-release via a collaboration of NNL and the European company Mangagamer is in the works.

Tropes for the first season include:

Kyousuke: "Amamiya, you were around? If it isn't really important, then be quiet. This is supposed to be a dramatic scene." 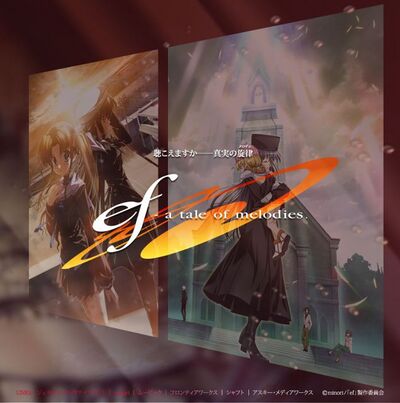 "Can you hear it? The true melody?"

The sequel, ef: A Tale of Melodies, shifts focus to the love problems of Yu's past and Kuze's present as occured in the rest of the second game.

Ten years ago, Yuu, Kuze, and their friend Nagi Hirono (yes, Hiro's sister) are all in high school. Yuu meets a girl who he remembers from his orphanage, Yuuko Amamiya, who turns out to be the adopted younger sister of the art club president, who is trying to get Yuu to join.

In the present, a year or so after the first season, Mizuki meets Kuze and they fall in love, but unfortunately Kuze is dying from a rare heart condition. We see the characters from the first season and their continuing relationships as they offer the pair their help.

Mizuki's cheerfulness aside, this part of the story is significantly darker than the straight-up romance of the first season. It deals with different psychological issues, such as loss, death, facing one's own mortality, familial relationships among non-family members, and several others.

Tropes used in ef: A Tale of Melodies include:

(The second season contains many tropes from the first; only those that differ should be listed.)

Yuuko (to Yuu): Would you mind not speaking out portions of your internal monologue?

Mizuki: Do that thing! "The Lord watches over you", or whatever!
Yuu: I'm not a priest or a minister.
Mizuki: But it still fits you.
Yuu: (Doing the Sign of the Cross) May The Force be with you.
Mizuki: What's that?
Yuu: Something way better than God.