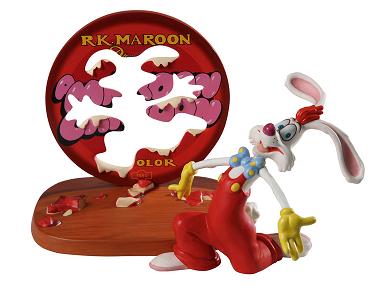 Any cartoon character running towards a solid body at sufficient speed will pass through and leave a hole exactly the same shape as they are, including clothing, fur and whiskers. May be combined with There Was a Door and be played for comedy. If the character is large enough, it can become a Roofless Renovation. Can also be horizontal if falling from a great height.

Sometimes, if the surface is metal, the character will leave a perfect depressive imprint, often in impossible mold-like shapes.

Examples of Efficient Displacement include:

"Wow. You know, from the other side, I can see how that is extremely annoying"

Monica: What would you have done if I had said yes?
Chandler: Well, I would've been happy, because I would've been able to spend the rest of my life with the woman that I love. Or, you would've seen a Chandler-shaped hole in that door.

Leo: You know, it was a screw up, but I got to say I love the way he did it -- full speed, bam. Like there's a Sam Seaborn-shaped hole in the wall.

"I don't think her hair would weigh so much that it would leave an indent, but you get the idea."

(the Torso 9000 has gone missing)
Ted: But I need my body! Its got my arms and legs on it!
Slick: We'll find it.
Spin: Yeah, it didn't get up and walk away.
Dr Zub: As a matter of fact, Spin, that's precisely what happened. (shows door with Junkman-shaped hole in it)