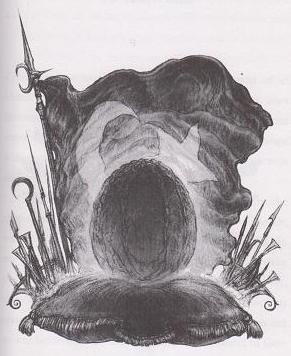 The egg to end all wars.

Sometimes, an episode of a series may involve a character discovering an egg of some sort which later hatches. Occasionally, the protagonists may save the egg from a terrible fate: either from being smashed or from being something or someone's lunch. The egg eventually hatches and the character gains a Pet Baby Wild Animal.

Usually the baby is a Small Annoying Creature (though it may actually be a gargantuan creature with the mind of a small annoying one) that thinks the first person (usually the discoverer) it sees is its "mama". Usually the baby may be far too much for the character to handle and they have to somehow find its real parents. A common variant has the egg hatching into something evil.

The trope can get even more unusual when the resulting offspring ends up taking on the characteristics of the hatcher, rather than who actually contributed to the genetics.

If the plot revolves around the unknown origin or result of a different kind of egg, it may be Who's Your Daddy?

A frequent cartoon scenario has a Talking Animal, or more often a Speech-Impaired Animal, is trying to keep an egg warm without being interrupted or losing the egg in a offbeat chase scene. When the egg hatches, this often results in the (usually male) babysitter being referred to as Mommy.

Compare Egg Sitting, where the egg is just a stand-in for a baby.

Has nothing to do with breakfast sandwiches. You're probably thinking of an Egg McMuffin, for some silly reason.

Examples of Egg MacGuffin include: