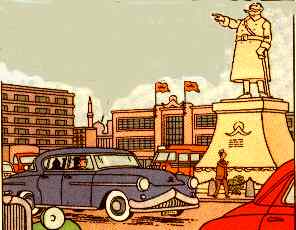 Many a self-aggrandizing dictator has not been satisfied merely with building entire factories to produce busts and portraits of himself. For these rulers, the ultimate statement of their power has been to name or rename entire towns after themselves. Don't be surprised if there's a big Our Founder statue in the central plaza or entrance. Or both.

There is some Truth in Television to this, such as Stalingrad and Saparmurat "Turkmenbashi" Niyazov.

Is a common trait of a Villain World, and frequently seen as a result of (or part of starting) a Cult of Personality. The renamer is likely to be The Caligula or The Generalissimo. Tends to lead to Please Select New City Name a generation or so later...

Compare Conspicuous Consumption and Airstrip One.

Examples of Egopolis include: