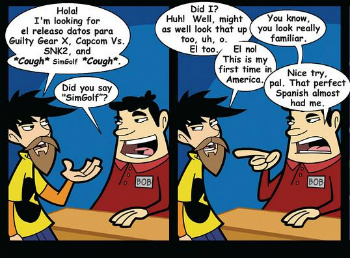 People all over the world are in contact with people who speak other languages. Much of the time however they cannot actually speak other people's languages. Sometimes, usually as a joke, they will try to "speak" the language by taking words in their own language and then adding stereotypical linguistic markers of the target language in an attempt to fake it.

This is usually a joke, but sometimes it's just plain desperation, if not outright insensitivity. In the U.S., Spanish is the language that most commonly gets this treatment, with the article "el" being put in front of English words and the masculine ending "-o" being put on the end. For example, an English speaker who wanted beer might ask a Spanish-speaker for "el beero". Other languages get this treatment too. Russian, for example, gets "-ski" added to the end of English words, ditto French with "-é" and Latin with "-us".

Actually has a small bit of Truth in Television, as some Spanish words are English loanwords with articles tacked on, such as "El Jazz", "La Radio", and "El Golf", and while English is not a Romance language like Spanish is a significant portion of the vocabulary is derived from Latin words also used in Spanish (and other romance languages).

Sister trope to Canis Latinicus. Compare to As Long as It Sounds Foreign, which is an attempt to actually use the real language, but getting it right isn't important. Also compare to Gratuitous Foreign Language (which is correct use of other languages) and Poirot Speak. Not to be confused with "El Niño" Is Spanish for "The Nino", which is using correct foreign words, but deliberately not translating them in a context where you normally would.

Examples of El Spanish-O include:

Mr Lucas: What does the customer require, Captain Peacock?
Capt Peacock: I'll try to find out.
Mr Lucas: Yes, of course. You were out east weren't you?
Capt Peacock: Mmm. Beat Whatee wantee?

Pugsy as interpreter was energetic but not wholly successful. He appeared to have a fixed idea that the Italian language was one easily mastered by the simple method of saying "da" instead of "the," and tacking on a final "a" to any word that seemed to him to need one.

Charlie: I met this woman, this apparition, this goddesse.
Kate: "Goddesse"?
Charlie: It's French - for goddess. (It isn't.)