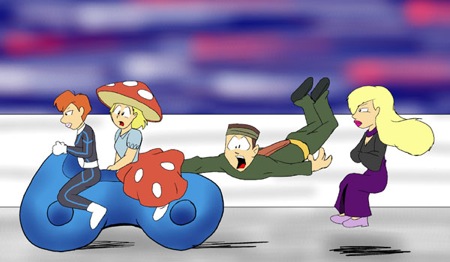 Welcome to the internet...of the future! It's evolved beyond its dimensions and become a fully immersive virtual world! Anyone can log onto this world from anywhere and take on any form or shape! Some only come to check their email or bank account...others spend much of their lives here. Some find jobs. Some find love. Some get robbed. Some get scammed. Some get ruined. And some do the ruining. The truth is that, no matter how advanced things get, the same problems of the past exist in the future.
—Introduction to Pilot

Peter Paltridge, the host of Platypus Comix, created Electric Wonderland in 2007. Unlike the other flagship series, it has a strong reliance on continuity and connecting events. Set in a futuristic[1], Internet-based City of Adventure called "Nettropolis", the comic focuses mainly on the staff of the Nettropolis Free Press, which originally consisted of Intrepid Reporter Eileen "Trawn" Peccadillo, pompous ninja NJ, naive painter Shroomy, and unpredictable Magical Girl Aerynn Arlia. Although Trawn hopes to end corruption with their independent newspaper, the comic spends more time exploring the potential of a community evolved from Cyberspace.

Tropes used in Electric Wonderland include:

Lululu: Go figure, how could a day that starts with a deadly explosion possibly go wrong?

Trawn: I've always dreamed of being a reporter, but not the kind the few conglomerate-controlled news outlets are currently looking for today! I want to print what they don't let me! I want to dig into the dirt and expose scandals at the highest levels of power! Nettropolis Free Press will launch a new era of hard-hitting journalism, unafraid of offending investors and losing advertisers! Within three years every corrupt member of government will fear us! That's basically it. What do you think?
NJ: I'm just...here to find a job. I think you need someone to talk to!

Girl Friday: How do I know this is reality?
Aerynn: Trust me...it is!

So, everyone notices she looks like a guy, but no one minds he's dating a DEER?

Donut Saleslady: (after Trawn falls up and hits the ceiling) Want some donuts? Our store's different today!
Trawn: Here's an idea, how about something NORMAL?
Donut Saleslady: Normal? What kind of April Fool's Scrooge are you? I hope some night specters show you the way!

NJ: Now we're gaining a girl with a mushroom on her head? Do you have any hiring standards at ALL?
Trawn: Of course not. I hired you, remember?

Shroomy: Why can't you just make us invisible, create a sound-muting field so no one can hear us, and make us transparent so we could walk through walls?
Aerynn: Yeah! Why don't I?
(Aerynn casts the requested spell on herself and Shroomy, causing both of them to fall out of the building)
Aerynn: ...Right. THAT'S why I don't do that...

You wanna fool someone, call a rookie next time. I'm rank AAA. I've fought at least a hundred magicians and taken a history course on thousands more. And I've never seen the fantasy you just cooked up. Ever. I've also studied the physics code for the Internet and over half the powers you told me are impossible. IM. POSSIBLE.