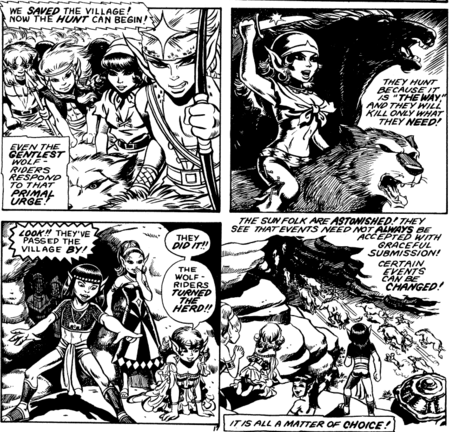 This is an admitted Sub-Trope of the Bad Writing Index -- The Law of Conservation of Excitement -- but sometimes it's fun.

You might find it hard to believe, but some writers actually use way too much emphasis in their descriptions! Using punctuation, formatting and endless superlatives, they exhaust you by endlessly insisting THAT EVERYTHING THEY TELL YOU IS TOTALLY EPIC!!

You'll see a lot of shouting on this very wiki, but since the question of whether or not it's overdone is purely subjective, what can you do? NOTHING!!

Overemphasis comes in many forms. The writer may be typing as though they were talking to you, and attempting to convey their excitement by yelling! They might be using text-only formatting tricks like setting boxes aside, underlining and using different colors. Perhaps they insist use intense words like "incredible" and "despicable" when there's not much reason to. In any case, the effect is the same: you're left without a way to gauge how amazing or important things "really" are.

Remember this: When everything is emphasized, nothing is!

Related to Bold Inflation and overlaps with This Is for Emphasis, Bitch when "bitch" comes every other sentence. It can also crop up when the character (or writer) is particularly enthusiastic, invested or offended. This can result in any one of the What Do You Mean It's Not an Index? tropes. When similar overemphasis is used in acting, the result is an enormous, ebullient Large Ham!! See also Punctuated! For! Emphasis! for constrained emphasis.

Examples of Emphasize Everything include:

Retrieved from "https://allthetropes.org/w/index.php?title=Emphasize_Everything&oldid=1565766"
Categories:
Cookies help us deliver our services. By using our services, you agree to our use of cookies.