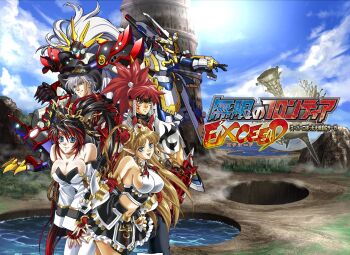 In case you didn't notice, there are big melons in the Frontier.

Super Robot Wars OG Saga: Endless Frontier is an Eastern RPG for the Nintendo DS. While not taking place in the same universe as the Super Robot Wars Original Generation games, it is nonetheless tied to its story.

The Endless Frontier is a collection of multiple worlds connected by dimensional portals known as "Cross Gates". In one of these worlds, Bounty Hunter and amateur ladies man Haken Browning and his Artificial Human Sidekick Aschen Brodel explore the ruins of a crashed spaceship, one they were both found in when Haken was just a baby. Inside they find, much to their surprise, a rather well-stacked young woman with a big-ass sword and a tiny dress sleeping in the crew's quarters. Turns out she's Kaguya Nanbu, The Ojou of one of the Frontier's worlds. Upon finding out there's a reward for her safe return, the pair decide to accompany her home. Since this is roughly the first ten minutes of the game, things naturally start to snowball from there: strange crystals start sprouting up all over the Endless Frontier, and some very familiar-looking robots connected with a war that happened ten years ago have appeared again. Secrets, conspiracies, spankings, and lots and lots of boob jokes await.

Along the way, our heroes run into a number of travelers from outside the Endless Frontier: Reiji Arisu, a law enforcement agent of Shinra from Earth, his fox-spirit partner Xiaomu (you may remember them (or not) from Namco X Capcom), and KOS-MOS, a Robot Girl from the far future. Unfortunately, their problems have tagged along, too.

A sequel called Endless Frontier EXCEED has been released, with a somewhat wider focus: The Fairies (Elves) from Elfetale fled the Frontier during the war and ended up spending the next ten years coexisting with the Shura. When a Shura fortress (coincidentally the one the Fairies are mostly living in) ends up getting tossed into the Frontier, Elven Princess Neige Hausen sets out to find out what is going on. Accompanying her is young Shura warrior Aledy Naash, who has the additional job of tracking down a Shura artifact that decided to step off it's pedestal and take a walk, particularly before their rivals find it first.

Meanwhile, the Frontier is abuzz about the appearance of black Mid-Keil crystals, and with them one of the last surviving Einst: Alfimi, along with Axel Almer, who have both lost their memories. To make matters worse, more Shadow-Mirror remnants are on the move again...

Understandably, EXCEED features a much-expanded cast. In addition to the new faces, the entire cast of the previous game joins the party, including Reiji, Xiaomu, and KOS-MOS (who also brings MOMO along this time). EXCEED even pulls in a character from an obscure Banpresto Super Nintendo RPG called Gaia Saver.

Oh, and there's been no word of a US release for EXCEED...

A third OG Saga game was released in 2010. This game was mostly unconnected to the Endless Frontier games, and is instead a remake of Super Robot Wars Gaiden, modernized to fit into Original Generation continuity.

Haken and Kaguya are set to reappear, this time in Project X Zone, a Spiritual Successor to Namco X Capcom. Although there's no news on whether or not their allies will appear with them, Sanger Zonvolt from the main Original Generation series will be in it.

Tropes used in Endless Frontier include:
Retrieved from "https://allthetropes.org/w/index.php?title=Endless_Frontier&oldid=1551024"
Categories:
Cookies help us deliver our services. By using our services, you agree to our use of cookies.