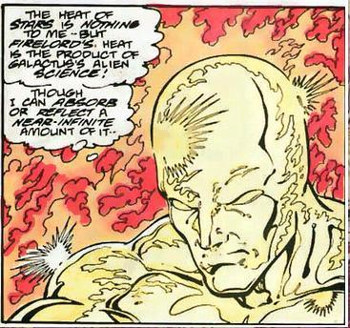 Some devices, characters, Humongous Mecha and/or supernatural beings have the power to absorb Ki Attacks, Life Energy, Energy Weapons, and sometimes even Liquid Assets. The absorbed power may be part of a Charged Attack, it may be available to power the user's Tim Taylor Technology, it may be the result of an artificial Negative Space Wedgie, or the power may just be a specialized form of Deflector Shields.

The traditional Achilles' Heel of Energy Absorption users is Phlebotinum Overload. Particularly astute protagonists will think to Reverse Polarity and use the power as a substitute for Energy Weapons before it overloads....

Found in both Anime and Speculative Fiction Series.

Energy Absorption is usually, but not always, an example of Feed It with Fire. Compare and contrast with Adaptive Ability, which has a similar effect, but without the risk of Phlebotinum Overload. See also Elemental Absorption when this is done with Elemental Powers.

Examples of Energy Absorption include:

"Please don't shoot me, either." He turned the palm upward in a friendly shrug and let the astonished troopers stare at the only effect of the Force-blunted blasterfire: a faint curl of steam that trailed upward from his unmarked palm. "Let's try to end the day with nobody else dying, shall we?"