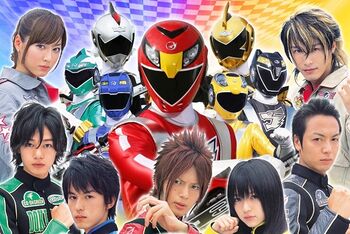 Engine Sentai Go-onger is the 32nd program in the Super Sentai series, which aired from 2008 to 2009.

Including the earth humans live in, the Human World, there are 11 Alternate Dimensions altogether.[1] Three Engines from the Machine World crossed dimensions in pursuit of the three Ministers of the Gaiark, a machine clan which thrives on pollution. They're found in the Human World, which the Ministers plan to conquer through pollution. Finding out that they can only stay in their giant forms for a small period, the Engines' navigator robot, Bomper, recruited three people at a racing circuit to become the Go-ongers to fight together with the Engines. They're soon joined by two more people who see them in action. Some time later, a pair of ESPer siblings connected to Engines also appeared: Though they had frictions initially, they joined the crew as well.

Vehicles and racing are chosen as the themes for the Rangers, and the motif is about Ecology; the three Gaiark Ministers represent land, water and air pollutions respectively.

Originally unintended to be contractually bound to its US version, Go-onger was... weird. The series took a sharp turn to comedy, sacrificing a significant plotline for Running Gags, Character Exaggerations, and overall tried to be much Lighter and Softer than an average Super Sentai title. For many, this came off as a polarizing shift in the wake of the dark and story-heavy previous series. It didn't help that people weren't informed beforehand about the series being a deliberate attempt at comedy. The incorporated Green Aesop was also seen by some as a bit preachy (though it was for the most part Played for Laughs). That's not to say it's all bad; there are many moments where it's genuinely fun, funny, or both, especially when looked past the seemingly childish premise. It also plays a lot of Japanese Media Tropes, in particular Super Sentai tropes, very often, even to the brink of parody.

And remember: This series is comedy. We're supposed to laugh!