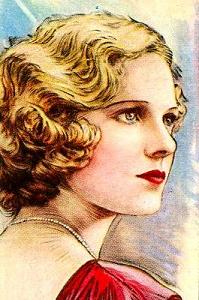 An English Rose is a nostalgic idea of a beautiful young English lady. She is virtuous and possesses a certain type of modest beauty. This character is always of English (or British at least) breeding, and likely to speak in the RP accent.

If from a historical period (and upper-class), she was raised to be a Proper Lady. A modern specimen does not need to follow the full of Proper Lady ideals, but still has to be a nice girl: well-mannered and goodhearted.

An English Rose is often composed and dignified in any social setting. A major characteristic is her humility in terms of family and society. Her will can be iron-hard, while subservient to her husband, if she has one. Before marriage tends be a more spirited version, but doesn't necessarily lose that spirit after marriage. In fact, one of the charms of the English Rose may be her ability to maintain decorum and pleasure regardless of any trouble.

While English Rose is not defined by a specific look, it does have a set of associated characteristics.

There is no requirement for actresses portraying her actually to be English, or even British.

The phrase comes from the 1902 comic opera Merrie England, in which there is a description of a garden where women are the flowers, and the fairest is "the perfect English rose".

Compare with its sister tropes, Yamato Nadeshiko, from Japan, and Bonne Belle, from southern USA. Also compare The Woman Wearing the Queenly Mask.

Examples of English Rose include:

Retrieved from "https://allthetropes.org/w/index.php?title=English_Rose&oldid=1944368"
Categories:
Cookies help us deliver our services. By using our services, you agree to our use of cookies.