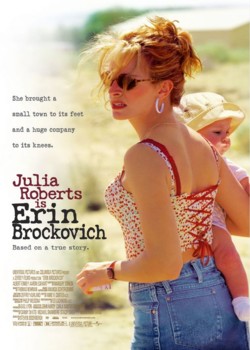 Erin Brockovich is a single mother without a job and with thousands of dollars in hospital bills from a car accident she was in (and unsuccessfully sued the other driver to pay). Desperate, she gets her lawyer to take her on as a legal assistant. While everyone else is very professional, Brockovich dresses rather trashily and is rather crude. Then one day, she begins to investigate the Pacific Gas & Electric Company and discovers they're dumping toxic waste into the water supply of Hinkley, California. By using her...considerable assets...she begins a legal battle that would end up the largest class action lawsuit in American history.

Yes, this is Based on a True Story, and Erin Brockovich is a real woman. She gets a cameo as a waitress in a Greasy Spoon restaurant.

The film was nominated for five Oscars, but won only one: Julia Roberts' only Oscar win for Best Actress.

Tropes used in Erin Brockovich include:
Retrieved from "https://allthetropes.org/w/index.php?title=Erin_Brockovich&oldid=1921836"
Categories:
Cookies help us deliver our services. By using our services, you agree to our use of cookies.