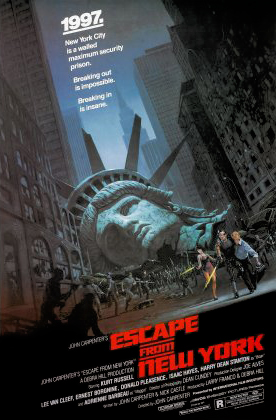 "Breaking out is impossible. Breaking in is insane."

Escape From New York (1981) is a cult-classic action film featuring the dream team of John Carpenter and Kurt Russell. The story is one of the classics: a rescue mission. The President's plane has crashed in the badlands, and so Police Commissioner Bob Hauk (Lee Van Cleef) is forced to recruit the most Bad Ass criminal available to go in after him. That man is Snake Plissken, and if that name doesn't tell you everything you need to know about the character, you probably shouldn't be watching this kind of movie in the first place. If you still need a clue, he's wearing an eyepatch. And the only way to get him to agree to help is by putting on an Explosive Leash and turning him loose.

Oh, and as you may have worked out from the title, the badlands in question are the ruins of New York. Because this film is set Twenty Minutes Into the Future (or rather, sixteen years, in the year 1997), and Manhattan has become a giant ruin of a penal colony, full of savage gangs and ruled over by the Duke of New York, played by the late great Isaac Hayes.

The film is a classic of the dystopian future genre, and Snake is himself a classic Jerk with a Heart of Gold Anti-Hero. Snake's history is mostly just hinted at, but a Novelization, now out of print, fills in some of the details.

The supporting cast includes a lineup of memorable character actors, including Lee Van Cleef, Donald Pleasence, Harry Dean Stanton, Ernest Borgnine, Adrienne Barbeau, and Adrienne Barbeau's cleavage, which frankly deserves its own credit despite the brevity of its appearance.

Fifteen years later, Russell and Carpenter reunited for a sequel, Escape From L.A., which dispensed with much of the grittiness to lampoon Los Angeles and Hollywood culture. It was not met with nearly the same level of acclaim as the original.

A remake of Escape From New York is currently in development.

Tropes used in Escape from New York include:
Retrieved from "https://allthetropes.org/w/index.php?title=Escape_from_New_York&oldid=1364732"
Categories: