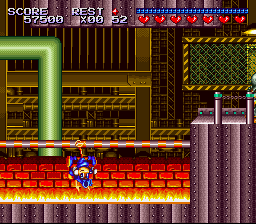 A vast factory complex or machine that can fill up a building, a city or even a whole planet. Its purpose may not be readily apparent, probably due to the sheer size of the thing. Pumping pistons act as elevators or crushers, conveyor belts cover half the floors, and you can expect something to try to squash you flat sooner or later. Needless to say, this would not be a fun place to work. The Eternal Engine may be the insides of the Forgotten Superweapon, or Polluted Wasteland for a technologically inclined Big Bad. In either case, you usually run into it as one of the final stages.

Not surprisingly, Eternal Engine often fills in for, or is combined with, Lethal Lava Land. In which case, either the machine runs on Geothermal power, or it may have vast bodies and such of molten metal rather than lava. Expect Convection, Schmonvection to play out in full force either way.

Named after a stage in Sonic Adventure 2 (which was actually in a giant space station if you want to get technical, but eh).

See also No OSHA Compliance, Nightmarish Factory. Also see Womb Level, the living version. You may have been looking for Perpetual Motion Machine.

Examples of Eternal Engines include:

Retrieved from "https://allthetropes.org/w/index.php?title=Eternal_Engine&oldid=1708111"
Categories:
Cookies help us deliver our services. By using our services, you agree to our use of cookies.