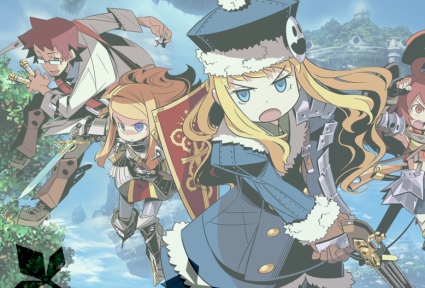 What do you mean you forgot to buy the warp wire?

The series' original designer and director admitted in numerous interviews that he was directly inspired by old retro-era dungeon crawler games, specifically Dungeon Master. He lamented that no one made games like that anymore, and set out to create Etrian Odyssey in the hope that it would catch enough interest to revive the genre. While it was not an overnight smash success in that regard, there was enough interest in the first Etrian Odyssey to spawn a sequel. These days, a few more examples of first-person dungeon crawlers are starting to pop up here and there, such as The Dark Spire, Class of Heroes, and The Seventh Dragon, so who knows? They just might have succeeded. In Etrian Odyssey III's first sales week in Japan, Atlus has sold over over 88000 units. Genre revived, claps for Atlus and game team.

One of the most notable features about the series is the requirement to draw one's own map. The player is essentially presented with a blank grid and some different kinds of icons to place and made to do all the work. According to the director, this idea dates back to the old Dungeon Master-era games when one had to map out their own progress while playing, and the sort of strange sense of pride and attachment one would develop for their maps after they were complete. Etrian Odyssey seeks to recapture that, and thus, the only concession to modern technology it gives is letting you use the DS' touch screen on an in-game grid instead of requiring graph paper.

The series is also noteworthy for the infamous "FOEs" (Formido Oppugnatura Exsequens or, in the Japanese version, Field-On Enemy): visible floating orange spheres that take one step for every one step the player takes, and have various patterns; some patrol in circles, others rush straight for the player, etc. If the player collides with an FOE, combat begins with a monster that is usually immensely more powerful than everything else on the level, and meant to be avoided until later, when the player is much stronger. When other RPGs display a message to the effect of "you suddenly sense the presence of a powerful monster that will eat your face, maybe you should run," it's code for "you might want to save first before killing it if you're under-leveled, otherwise, eh." Etrian Odyssey, on the other hand, means it. Also, it's worth noting that each round of combat counts as a step for FOE movement, so be careful not to take too long fighting when you're next to one, since they can and will walk up and join in. All this is on top of the already significant difficulty of the rest of the game.

Etrian Odyssey has nine character classes to choose from, allowing you to name your characters and (somewhat) customize how they look. The classes include the Protector, Medic, Landsknecht, the monster hunting Dark Hunter, Alchemist, Troubadour, Ronin (who for some reason is always being replaced by some other job in the later installments), Survivalist and the curse casting Hexer class.

Heroes of Lagaard is basically the same game as the original, albeit with classes being completely overhauled, plus some minor quality-of-life tweaks, such as a larger variety of icons for the map, quicksave support, and the ability to walk sideways. One can generally identify a dedicated Etrian Odyssey fan by the tears of joy over the simple fact that you can place arrows on your map now. New Classes include the Gunner, War Magi and the ferocious Beast class.

The Drowned City features entirely new classes including the Buccaneer, Ninja, Farmer, Zodiac, Prince(ss), Gladiator, Hoplite, Wildling, Monk, Arbalist, and the two unlockable classes, the Ronin-replacement Shogun and the Yggdroid. The Drowned City also adds the ability to sail the seas in a ship, meaning you can sail to the dungeons instead of going straight to them from town.

Legends of the Titan reintroduces some of the classes from the first two games, like the Landsknecht and the Medic classes, while introducing certain other classes, like the RuneMaster, Fortress, Sniper, Dancer, Nightseeker, and three unlockable classes, the debuffing Arcanist, the Ronin-replacement Bushi and the Elemental Weakness exploiting Imperial. Legends of the Titan is the first game in the series to feature 3D models for enemies, meaning you can now see what an FOE looks like without having to fight it. It also includes an Airship that you can control, allowing you to harvest resources, sail to dungeons, and encounter (or just run away from) bonus bosses.

Beyond the Myth splits it's classes between four races, Humans, or "Earthlains", Elves, or "Celestrians", Therians, and Gnomes, or "Brounies". Classes are, at first, locked by race. But when your adventurers reach a certain level, they can change into any class regardless of their race. Earthlains start out with the Fencer, Dragoon, Pugilist and the Sinister Scythe wielding Harbringer classes. Celestrians start with the Warlock or the Necromancer classes. Therians start with the Rover or the (once again) Ronin-replacement class, Masurao. Finally, Brounies start out with the Shaman and the Botanist classes. Beyond the Myth is also the first game in the series that lets you customize the appearances of your party members, changing their color schemes and even giving them voices.

Nexus only introduces one new job class (not counting the psuedo class: Vampire class) Hero class. 18 classes from the previous games return for Nexus, making a total of 19 (20 if you include Vampire) classes, the largest in the series to date.

Note that in the following examples, Etrian Odyssey refers to the original game. The second is referred to as Heroes of Lagaard, the third is referred to as The Drowned City, the fourth: Legends of the Titan, the fifth: Beyond the Myth and the sixth: Nexus.

There have also been multiple spin offs, like Etrian Mystery Dungeon (Shiren The Wanderer meets Etrian Odyssey), which has had two releases, with only the first one coming to North America. There is also Persona Q (Persona meets Etrian Odyssey), where the main characters from the third and fourth (and fifth in the sequel) games meet each other in a parallel universe they are trapped inside, where they team up to escape it. Persona Q has had two entries, both coming to America. The first two games have also gotten special remakes in the "Untold" series, where along with classic mode, there is also a separate mode with more of an emphasis on story.

Is not what would happen if Homer wrote stories about Jason Blood. Now with a character page!

For similar games to compare and contrast, see the Ur Example, Wizardry, and or the main-series Shin Megami Tensei games, including the fairly recent DS spinoff, Strange Journey.

Tropes used in Etrian Odyssey include:

Retrieved from "https://allthetropes.org/w/index.php?title=Etrian_Odyssey&oldid=1955172"
Categories:
Cookies help us deliver our services. By using our services, you agree to our use of cookies.