Everybody Do the Endless Loop 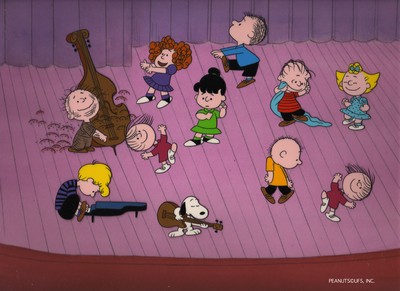 Animation is hard work. The advent of computers in the hands of professionals have given cartoon characters more lifelike movements and mannerisms than we had ever seen before, but that's not the way they had it in the good old days, when each individual twitch on Mickey's eyelid had to be put in motion one frame at a time. Besides, animation is expensive, meaning that if you've completed this one sequence, and it looks good enough, you're going to see the characters behave in exactly the same way whenever the story demands that particular action, to the point that it looks jarringly obvious.

And so, when the story calls for our Toons to show off their stuff on the dance floor, you'll see that Michael Jackson had not a thing to worry about. Their movements are stiff, twitchy, and repetitive; often, no two characters will dance to the same beat, and none of them will pay any mind to the kind of music that's actually playing. If a series features more than one dance scene, for example, you'll notice that all the characters waltz the same way they tango. Finally, there are one or two distinct moves per character, which they will repeat over and over and over again. One really must wonder whether this is a dance at all; for all we know, the characters have just finished watching that one episode of Pokémon that gave a bunch of people epileptic fits.

Of course, this trope is a veritable gold mine of Narm Charm. No work that pays homage to the Peanuts animated series will fail to mention the piano-accompanied dance scene from A Charlie Brown Christmas, for instance. The Internet has really taken a liking to it, too, the "Peanut Butter Jelly Time" dancing banana avatars (and all variations thereof) and Caramelldansen videos being the two most noticeable memes.

In Video Games, this falls under Going Through the Motions.

Examples of Everybody Do the Endless Loop include:

Retrieved from "https://allthetropes.org/w/index.php?title=Everybody_Do_the_Endless_Loop&oldid=1883421"
Categories:
Cookies help us deliver our services. By using our services, you agree to our use of cookies.