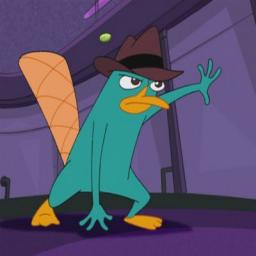 He's got more than just mad skill: He's got a beaver tail and a bill!


'Cause he's semi aquatic.
—Everything's Better With Perry, Phineas and Ferb The Movie: Across the 2nd Dimension

Much like Monkeys, Penguins and Pandas, the duck-billed platypus has achieved a certain level of popularity.

The platypus is probably the most iconic aquatic Australian mammal; many advertisements for pools, swimming lessons and fishing gear will use one. It is also used on the Australian 20-cent piece.

Some believe that the platypus proves God has a sense of humor, or He's a total psycho, or He's rockin' the ganj, or that evolution is 100% real, because not even God could make that nonsense up. The reasons are myriad. This is an animal that, upon being sent to a British natural history museum to catalog, was believed to be a taxidermist's prank until a live specimen was sent to them. It looks like a beaver crossed with a mole with a duck's bill added for laughs. They belong to a group of mammals known as Monotremes, a group consisting of it and the echidna, which means they lay eggs. Additionally, they're an offshoot of mammals that evolved before teats/nipples evolved, so while they produce milk, they simply... sweat it out for their young to lap up. They also have ten sex chromosomes, where in most mammals there're simply two (X and Y). And their duck-bill? It's actually quite soft, and it acts as an electrical receptor. See, platypus eyes aren't too useful, especially underwater, so they use an electrolocation system in their bills to hunt shrimp and other aquatic invertebrates. Sharks have a similar sense, in case they weren't scary enough. Of course, a real platypus tail looks nothing like a beaver's tail, but that doesn't stop the majority of cartoon depictions from showing one anyway, often complete with thumping behavior.

And to top it off, they're venomous. Yup, male platypi have venomous spurs on their feet, and while not lethal to humans, the cocktail of venom will usually incapacitate people, and can cause you to be in excruciating, incapacitating pain that can develop into a persistent ache for weeks or months. So it won't kill you, it'll just make you wish it had.

So, in short, it's easy to see how humans can become so interested in this goofy-looking creature. Odd appearance, cool features, and the ability to cripple you if you get stupid. What better metaphor for Australia? And it's an Inherently Funny Word. And they swim weirdly. Also, baby playtpi are called "puggles," which is quite possibly the cutest word ever invented, and have been called so since before pugs were crossed with beagles to make the dog breed of the same name (Note: This isn't the official name for a baby platypus, just the most commonly used one. Another just-as-adorable name is "Platypup".).

All good things must come to an end, however. This is slowly becoming a Discredited Trope, because it's gotten so that the platypus has become too popular to be considered "obscure" anymore. When a show is supposed to start including a "weird animal" in its cast, expect it to be a platypus.

Plus, if you want to talk about them in the plural, expect to confound linguists until the end of time. Is it Platypusses? "Platypi?" Platypeople? Whatever.[1]

Examples of Everything's Better with Platypi include:

Andrews: Ummm... Bastion? One question. What the hell is that thing on the table?