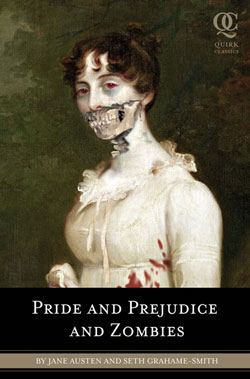 Even Jane Austen's books are better with them.

There's a Romero-style zombie shambling around, but it's not a Zombie Apocalypse. So what's it doing here? Because zombies are cool. Whether it's to set up a Low Fantasy setting with necromantic Horrors, add an element of comedy, or simply to add variety, some works of fiction feature Zombies in a less than central position. It doesn't even have to have a reason. The zombie is there just because.

This is something of a popular advertising gimmick for games, MMORPG's, and Comic Books these days. Just like slapping Wolverine on the cover adds to sales, a "zombie invasion", "Halloween Episode", or other stunt can drive up sales and give a fun Breather Episode from more plot heavy story arcs.

This could also work if there actually is a Zombie Apocalypse, but it's not part of the main story. It's just thrown in there as a parody or homage with little lasting effect on the plot.

Examples of Everything's Deader with Zombies include:

Retrieved from "https://allthetropes.org/w/index.php?title=Everything%27s_Deader_with_Zombies&oldid=1927796"
Categories:
Cookies help us deliver our services. By using our services, you agree to our use of cookies.