Everything's Even Worse with Sharks 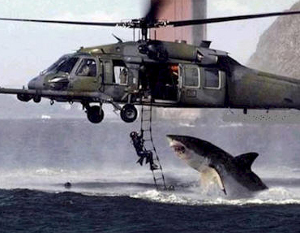 The one day you decide not to bring shark repellent...

Trapped in the middle of the ocean with no realistic way of making it to civilization, likely go crazy and dehydrate in a couple days? That takes too long? No worries, the ocean is infested with sharks just waiting to devour you. Has the Big Bad got you? He won't shoot, that'd be too fast, he'll instead lower you into a Shark Pool. Want to ruin your show? Do a Shark Jump, or just introduce a Voodoo Shark. Want to cheat? GameShark. Want to ruin someone else's finances? Call in the All Devouring Black Hole Loan Sharks. Want to do the same but legally? Call in a legal shark.

If you're swimming or anywhere near water, the last thing you want to hear is "shark". In fictionland, or rather fiction-ocean, Sharks are unstoppable sea-monsters which devour everything in sight: fish, seals, people...license plates, car tires, suits of armour, car parts, severed human limbs. Sometimes they'll even attack ships: that's how Badass they are. Most animals eat to live, but sharks live to eat. Sharks are the ultimate Rule of Cool. Perhaps it's because they can sense your bioelectricity, meaning you can't hide from them. Perhaps it's because they have changed very little in the millions of years they existed, invoking a sort of reversed watery version of Everything's Better with Dinosaurs. Or maybe it's how their mouths are literally lined with hundreds of teeth. It doesn't matter, they're the most Badass animal that isn't extinct or made up. If they ever find a way to take to the land or air, it would surely be the end of us all. Really, if Sand Is Water, expect Land Sharks.

(Cool as they are, there are still ways to enhance them.)

In Real Life, it's a little different. Like most predators, they're misunderstood and not mindless killing machines. There are only a few species who have a reputation for attacking humans unprovoked (in fact, basically four species, and three will leave you alone when they taste you and realize you're not their usual food - stay out of bull shark territory, and especially open water with Whitetip Sharks), and recent studies of their behavior have shown many shark species to be very intelligent, social, curious, and even playful. Others are too small to be terribly frightening, avoid humans, or have teeth which are about as sharp as sandpaper and feed exclusively on things too small to see. Also, a shark will rarely be interested in a boat or raft provided nobody is throwing fish overboard. Ironically, the Jaws depiction of a Great White sinking small boats has some grounding in truth: Great Whites tend to 'test bite' things to determine if they're food... kinda like how infants try and eat everything they find. They are attracted to the appearance of their prey (a surfer swimming out with arms and legs in the water around the board looks like a seal) or blood. The bad reputation of sharks is not completely erroneous, but it's based mostly on most observed sharks being already attracted to food thrown overboard and on a variety of strange objects often found in a caught shark's stomach. Like many other large predators (such as bears), some sharks are prone to feeding frenzy - short periods of intense eating that ends in long sated inactivity. Thus, a very hungry shark may indeed indiscriminately bite and even swallow just about anything that fits in its mouth, up to and including an old tire, and later the same shark may be so overfed it will completely ignore a bleeding helplessly splashing swimmer in plain sight, or more conveniently sized fish, for that matter. This gave them reputation of both all-devouring and acting incomprehensibly erratic.

Their remarkably aquatic forms and resistance to disease are of great interest to science. Don't expect to see this come up in fiction, though. Also, like every other fish in the world, they are completely helpless and practically immobile on land, which for all that sharks are misunderstood and fascinating creatures is probably a mercy...

Megalodon is a recently popular prehistoric variant. Shark Man is a subtrope, caused by crossing them with humans into bipedal land monsters. See Sea Monster for other scary things in the ocean. You can relax if there are Heroic Dolphins, though. See Never Smile At a Crocodile for the rivers-and-lakes variant. Contrast Shamu Fu, the one situation where things may legitimately get better when you add a shark. See also Jump the Shark, in which this trope proved very true for the trope namer, and not in a fictional context.

Examples of Everything's Even Worse with Sharks include:

Retrieved from "https://allthetropes.org/w/index.php?title=Everything%27s_Even_Worse_with_Sharks&oldid=1965208"
Categories:
Cookies help us deliver our services. By using our services, you agree to our use of cookies.