Everything Is an Instrument 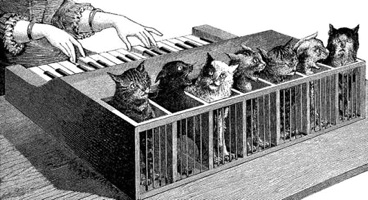 Music has a long tradition behind it, and with any tradition comes traditions of form and style. For music, there are certain things that are considered musical instruments and certain things which aren't. For example, you wouldn't be surprised to hear a violin playing music, but if you were to hear a chainsaw playing a well-known melody, you would be.

Many people have found the idea appealing, and make an effort to make musical sounds out of things that wouldn't necessarily be considered musical. Body noises like belches and flatulence are rather popular, as are animal noises and violence used to produce melodies. Whatever is used, it's something removed from the norm. Sometimes it's done for comedic effect, but just as often it's used by serious artists who have found that weird instruments make good music.

See also Serendipitous Symphony and Trash Can Band. If they actually build an instrument out of it, it's a Xenophone.

Examples of Everything Is an Instrument include:

Retrieved from "https://allthetropes.org/w/index.php?title=Everything_Is_an_Instrument&oldid=1804133"
Categories:
Cookies help us deliver our services. By using our services, you agree to our use of cookies.