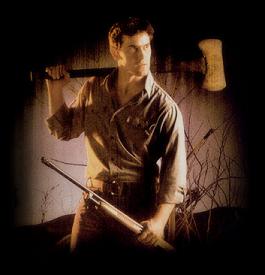 In 1979, a bunch of kids got together in a cabin in Tennessee and made a film with a standard B-Movie plot; this film was The Evil Dead. The film, which was directed by Sam Raimi (of Spider-Man fame), and starred Bruce Campbell (who is most associated with this series), managed to make enough money to warrant two sequels and get into the public consciousness. The result of the two sequels was a strange blend where Narm Charm meets Rule of Cool.

The first film's story follows a bunch of kids who get together in a cabin in Tennessee and play a tape recorded recitation from a demonic book of the dead (the Necronomicon) -- which leads to each of them becoming possessed and attacking the others. Evil Dead 2's plot was seemingly a rehash of the prior film with some rewrites; only Ashley J. Williams (Campbell) and Ash's girlfriend Linda go to the cabin, and the ending leads straight into Army of Darkness. The plot of the first film wasn't actually retconned, though -- due to copyright issues, Raimi was unable to use scenes from the first movie, which forced him to shoot a new recap (ignoring said recap makes Evil Dead 2 a direct sequel).

Army of Darkness is the most well-known (and quoted) film of the trilogy. Ash is transported back to Medieval Europe, where he finds out he can return to his own time -- if he can retrieve the Necronomicon first. Ash manages to find the book, but when he inevitably screws up the retrieval, he's forced to train and help the not-quite peaceful villagers he's placed in the path of an Army of Darkness.

The third film catapulted Ash into pop culture popularity; there are four videogames, tons of comic book adaptions (including crossovers with Marvel Zombies and Xena, as well as Freddy vs. Jason vs. Ash), a Role-Playing Game under the Unisystem umbrella, and a Broadway musical all based on Ash and the Evil Dead trilogy.

A remake of the first movie, directed by Fede Álvarez, was released in 2013. Sam Raimi, Robert Tapert, and Bruce Campbell were producers, while Diablo Cody doctored the script.

Films in this series:

Video games in this series:

Evil Dead is the Trope Namer for:
Tropes used in Evil Dead include:
Retrieved from "https://allthetropes.org/w/index.php?title=Evil_Dead&oldid=1600360"
Categories:
Cookies help us deliver our services. By using our services, you agree to our use of cookies.