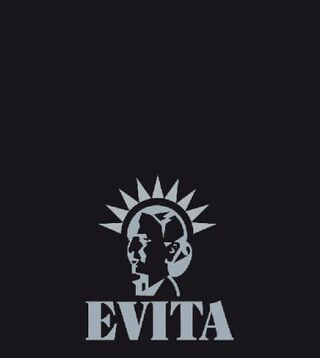 Evita is the 1970s musical by Andrew Lloyd Webber, based off the life of Argentinean First Lady María Eva "Evita" Duarte de Perón, wife of Juan Perón. Based on a True Story -- how much so depends on whom you believe.

We start at Evita's state funeral. Then we flash back.

In the beginning, Eva María Duarte is a girl from a humble rural Argentine family in the 1930s. She vows to make a better life for herself at any cost, and travels to the capital chasing her dream of becoming a star. Attaching herself to, using, and then abandoning a series of lover/mentors, she rapidly scales the ladder of Argentinian show business, until she is the country's biggest star and a household name.

She meets and marries Juan Perón, and becomes a major force in his own rise to power. She gives herself to Argentina, championing the working class even while draped in the trappings of luxury. While doing this, she sings lyrics that suggest political repression and duplicitous politics. She somehow ends up much beloved by Argentina, even though she doesn't deserve it.

This play angers many people. Some claim it has multiple historical inaccuracies, while others are just angered by the simplistic portrayal of a controversial figure who is still beloved by many. Her supporters see the play as defamation. This doesn't mean to say other Argentines didn't view it well -- the government even lent the balcony of the presidential palace (the "Pink House") to film the 1996 adaptation.

Evita began as a rock opera concept album and then was adapted into a stage musical in 1978. The West End production starred Elaine Paige and the later Broadway production starred Patti LuPone, both of whom would become theater legends. Madonna starred in the 1996 film adaptation. It was warmly received by critics and garnered nominations for several Academy Awards and Golden Globes, as well as a few wins.

Tropes used in Evita include:
Retrieved from "https://allthetropes.org/w/index.php?title=Evita&oldid=1829550"
Categories: