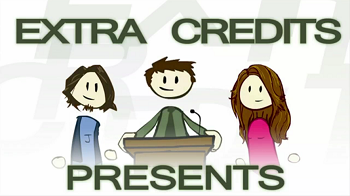 From left to right: James, Daniel and Allison

Extra Credits is a show, formerly hosted by The Escapist and now by PATV, that takes a deeper look at video games: how they are made, what they mean, and how we can make them better.

Hosted by James Portnow, Daniel Floyd, and Allison Theus (who provide writing, narration, and art respectively) the show tackles topics such as bad writing tropes, Diversity, and Free Speech as they apply to games. One of the core messages of the show is that games as a medium need to start treating themselves as Serious Business, and should work to fight the stereotypes and assumptions that are associated with the medium.

The series uses a voiceover over top of static, minimalist illustrations and funny pictures culled from various Internet sources, with emphasis on Visual Puns. Heavily inspired by another series made famous by The Escapist.

Despite the humour-oriented nature of the series, some insiders have noted that it is in fact very accurate about the material. The piece on what you need to have to be a game designer was noted by one designer as being spot on. This shouldn't be surprising, as James, Daniel, and Alison are all industry professionals; James is a game designer himself, Daniel is an animator for Pixar Canada (okay, not quite the right industry, but pretty close), and Alison is a concept artist at Relic Entertainment.

Unfortunately, it was revealed on the Extra Credits Twitter that due to a money-related misunderstanding, Extra Credits' run on The Escapist has drawn to a close. After a brief "hiatus" period on YouTube, they moved to PATV. Proof, if needed, that the two groups are on the same wavelength. However, due to Penny Arcade deciding to wind down PATV in December of 2013 Extra Credits is back on YouTube for the foreseeable future.

Pre-Escapist episodes can be watched here. (have in mind most of this had Updated Rereleases for The Escapist)

The entire archive from during and after their days at The Escapist can be watched here.

Tropes used in Extra Credits include:

Tropes that are discussed by Extra Credits: