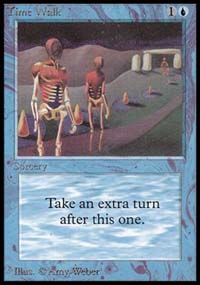 This trope in its most basic form -- and it's so powerful that it got banned.

In any game that divides itself into turns, it's natural for there to be ways to change the way the turns work. The most common of these is the simplest: the spell or effect that allows you to take an extra turn. Sometimes this comes in the form of your opponent skipping their turn, which isn't quite the same thing if there are more than two people involved.

Taking extra turns tends to be very useful, and in some cases obscenely powerful—these are apt to be Game Breakers if the developers are not careful. On the flipside, if the developers are too aware of the potential for breakage, these have a good chance of being made into Useless Useful Spells.

Examples of Extra Turn include:

Ain’t that how every war gets scored?
Big gun wins. Winner gets a free turn.
Enemy after enemy burns.

The titular Dual Strikes in Dual Strike let every unit take two turns (and if Eagle is involved, 3).