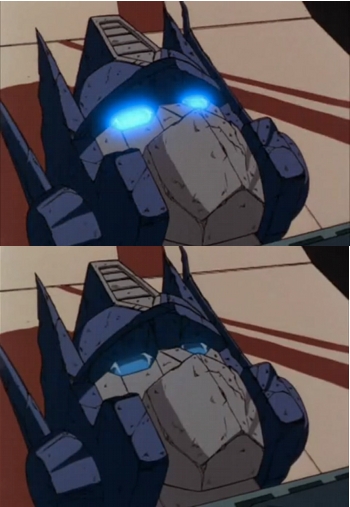 Optimus was like a nightlight for children across the world.... one that just burned out.

Whenever a being, mechanical, magical or meaty, has Glowing Eyes of Doom (or just glowing eyes, Doom Sold Separately) these will flicker and fade out whenever they die. Much like a candle guttering on the last of its wick, death can turn off the literal light in someone's eyes. If the being also has natural Power Crystals in their body (or as the eyes themselves), these too will fade out.

The standard justification for having glowing eyes in the first place is that these eyes are not detecting by ambient light, so the death of the owner also terminates whatever biological, mystical, or electronic process that makes them light up. It probably has more to do with the Rule of Cool.

Speaking of, since most beings capable of lighting up their peepers aren't human, you can expect that if one is Not Quite Dead they won't just have their eyes open, but blaze brightly.

Related to No Ontological Inertia, and when objects that the person has linked to their Life Force (which also glows) fades out or breaks at their death. Glowing Mechanical Eyes are a prerequesite for the robotic version. Not at all related to By the Lights of Their Eyes. Nor when you See the Whites of Their Eyes. Compare Volcanic Veins, where the veins stop glowing once the character dies.

This is a death trope. Spoilers ahoy.

Examples of Eye Lights Out include: