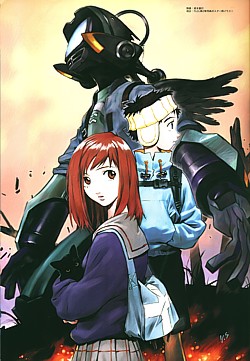 You will never see these characters appear so rational again.

FLCL (pronounced Fooly Cooly, not "Eff-ell-see-ell") is the story of Naota, a young Japanese boy who lives with his father and grandfather, is the object of inappropriate attention from his brother's ex-girlfriend, and generally feels his life and town are really boring. That all changes when he's literally run over by Haruko Haruhara, a manic older girl who rides a Vespa, claims to be an intergalactic police officer, wields a Rickenbacker bass guitar with a chainsaw-like pullstring motor on the back as a blunt instrument, and has no qualms about harassing Naota both physically and sexually. After his initial contact with Haruko, Naota's forehead starts spawning giant robots -- and the wackiness just explodes from there.

While there is a galaxy-spanning Space Opera plot somewhere in the background of everything that goes on in FLCL, its real appeal lies in one of two places: one is the story of a young boy coming of age, filled with allegorical and symbolism-soaked writing and imagery which ranges from clever to truly brilliant, along with strong characterization and goofy, off-the-wall humor -- while the other is a bunch of insane almost-nonsense strung together by other insane almost-nonsense to form a big ball of crazy that fascinates viewers while bringing a lot of big laughs between the cartoonish antics and the hilariously broken fourth wall.

The six-episode OVA also happens to feature gorgeous animation, excellent voice acting, and a rocking soundtrack (the majority of which is comprised of songs from Japanese alternative rock band The Pillows) -- all of which fans have come to expect from Studio Gainax. FLCL's English dub is so acclaimed that it is often considered one of the Gold Standards of Superlative Dubbing.

Rumor has it that many of the artists, writers, and voice actors who worked on this had just finished working on The End of Evangelion and were feeling emotionally drained due to the utter grimness of EoE -- so FLCL was a way for them to unwind. The truth of the rumor aside, FLCL is very much worth checking out as an art piece all its own.

There is a school of thought that FLCL is what you get when you get some of the best storytellers Gainax has, put them in a room, and give them The Good Drugs. (Give them all the drugs, and you get Panty and Stocking With Garterbelt.)

It has been oft stated: "If you wish to understand Fooly Cooly, watch the series from beginning to end. The desire will pass."

Adult Swim has stated numerous times that of all the anime the network has ever aired, FLCL is its favorite.

The original Synch-Point DVD release fell out of print, but FUNimation re-released the series on DVD -- and Blu-Ray -- in February 2011 (with the original dub included). It's also legally viewable (in the United States) on Hulu, Netflix, and YouTube.

Take a swing at the WMG and the character sheet.

Tropes used in FLCL include:
Retrieved from "https://allthetropes.org/w/index.php?title=FLCL&oldid=1776944"
Categories:
Cookies help us deliver our services. By using our services, you agree to our use of cookies.