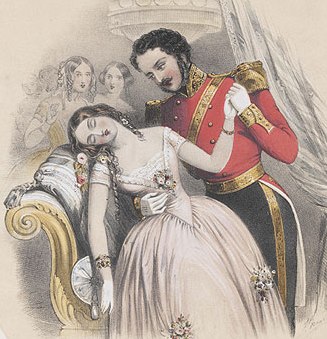 Because breathing should never get in the way of looking ladylike.

If people in Real Life actually do faint when presented with a shocking development, it is an extremely rare occurrence. So rare that you may not have actually ever seen anywhere but on TV or in the movies.

Fainting in fiction usually takes one or more of the following forms:

While not specifically being a faint per se, the phenomenon where a delicate Southern Belle responds to a dramatic situation by declaring, "Ah do believe ah have the Vapours!" serves much the same purpose as a Corset Faint. It shows the fragility and delicateness of the heroine, done purposely as a theatrical ploy by the heroine or as an excuse to remove herself from a dramatic situation. By the way, "the vapours" are just a fancy, euphemistic name for "intestinal gas."

Examples of Fainting include:

Retrieved from "https://allthetropes.org/w/index.php?title=Fainting&oldid=1634689"
Categories:
Cookies help us deliver our services. By using our services, you agree to our use of cookies.