Everything About Fiction You Never Wanted to Know.
(Redirected from Fairy Tales)
Jump to navigation Jump to search 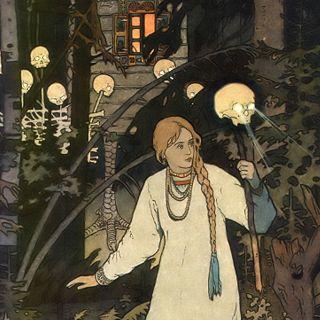 Outside Baba Yaga's Hut, in a Russian Fairy Tale

A story which depicts a fantastic sequence of events. Often, fairy tales include creatures from folklore such as goblins, witches, and dragons. Fairy tales usually take place "Once Upon a Time", with few (if any) references to real people, places or events.

Orally told fairy tales are told in extremely spare and laconic style. Even the fancy dresses the heroine wears to a ball are discussed briefly; "three dresses, one as golden as the sun, one as silvery as the moon, and one as bright as the stars" and the story goes on. Likewise, characters are defined by their actions. Even when motives are provided (which is only for human characters), they are short and simple: the heroine is out to find her fortune; the hero wants to marry the princess; the Wicked Stepmother is greedy and doesn't want her stepchild to have an inheritance, or envious of her beauty, or if she has a stepson, destroy his wife; the false hero wants to marry the princess; the king falls in love with the strange woman he meets in the woods because of her beauty. And motives may not be; in the Grimms' "The Twelve Dancing Princesses", we never find out why the princesses are going to the nightly dances, and indeed never discover whether they are doing so voluntarily or not.

"Fairy tale" is often used in modern times to depict an idealized romance or ending, although many classic fairy tales are much darker than many people realize. Heroes may be the victims of such violence as having hands chopped off or eyes gouged out; at the end of the story, villains may be disposed of by such methods as having them wear red-hot shoes and dance until they die, or putting them in a barrel lined with nails and having a horse drag it until they die. The spare style helps minimize the impact, as it can deal with the violence briefly and without gory detail, but even so many fairy tales have produced Nightmare Fuel. In some cases, this is intentional, to Scare'Em Straight.

Fairy tales are found in cultures all over the earth. Many tale types have wide-spread variants. However, only a tiny handful of them are widely known in modern culture. Consequently, when a writer goes to rewrite a fairy tale into Fractured Fairy Tale, with parody or subversion, it generally invokes one of that handful. For instance, the Fairy Godmother is a relatively rare figure in fairy tales, but having featured in "Cinderella" and "Sleeping Beauty", is epidemic in the Fractured Fairy Tale. Even retellings that do not parody the fairy tales generally stick to the best known.

Fairy tales were originally intended for all ages, but for a long period of time, they were only written or presented as children's stories. Disney is rather famous for adapting fairy tales into movie musicals, often with changes to make them more light-hearted. Writers who seek to restore fairy tales to their original intensity may intensify it to the point of Grimmification.

Very few fairy tales actually feature fairies; even those European countries with a developed fairy folklore preferred to use Talking Animals instead. The name of the genre can be traced to Madame d'Aulnoy's Les Contes de Fées, which appeared only after literary fairy tales became all the rage. Folklorists have made valiant attempts to give the category more accurate names, such as "wonder tale", or the Grimms' original term "household tale" or Märchen, but the name sticks. Other names include "folk tales" and "tall tales".

Several extremely popular tales such as Perrault's "Cinderella" and "Sleeping Beauty" did feature fairies, helping give weight to the name, while others like "Rumpelstiltskin" alluded to a more sinister kind of folkloric fairies. On the other hand, Perrault's "Cinderella" is an odd-ball; normally the Cinderella figure is helped by her dead mother, and "Sleeping Beauty" is as likely to be a victim of prophecy as a Curse). Many, such as "Rapunzel", "Puss in Boots", "Hansel and Gretel", and "Snow White", contain no such figures. Some, like "The Emperors New Clothes" contain no magic of any kind.

See also Fairy Tale Tropes and Propp's Functions of Folktales. Not to be confused with the similarly-named manga Fairy Tail.

For a list of tropes common to fairy tales, see Fairy Tale Tropes.

Retrieved from "https://allthetropes.org/w/index.php?title=Category:Fairy_Tale&oldid=1839393"
Categories:
Cookies help us deliver our services. By using our services, you agree to our use of cookies.