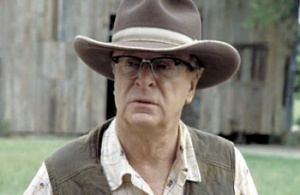 "Don't you hate it when you find out some really cool actor you like is actually Canadian?"

Fake Americans are usually Canadians, British or Irish (although Aussies, New Zealanders, and even South Africans have been known to fake American). This is usually done for biographical reasons, to allow for a familial relationship with another character with an American accent, or to portray a character as stereotypically American.

According to a documentary, in 2008 one-third of all piloted American TV series had British people in a starring or main supporting role, so this is expanding almost beyond the boundaries of trope. There are honestly so many actors playing fake Americans in games, tv shows, and movies as of late, most people that aren't familiar with many of the actors from across the pond assume they're American.

Britons who essay an American accent will usually opt to make the accent "colourful", and preferably Eastern. Expect to hear something along the lines of a) "salty" New Englander; b) Connecticut "blue-blood"; c) New Yorker, typically of the "Brooklyn" variety; or d) Southern, usually something from Georgia or the Carolinas but occasionally Appalachian, Ozark, or even Texan. This is because the Eastern accents share many phonetic quirks with British dialects, such as the broadening of vowels or the dropping of "r's." It is rare to hear one of these actors attempt, say, a California accent - but it is not unheard of.

Note that this trope does not apply to non-American actors who are not trying to disguise their accent or origin. America is a nation of immigrants after all, and it isn't all that unusual to meet people who were born or raised overseas, or natural-born Americans who carry an accent from growing up in an ethnic neighborhood. Expect such situations to be Lampshaded, however, especially if the actor in question has a relatively heavy accent, like Arnold Schwarzenegger.

A version of Fake Nationality, along with Fake Brit and Fake Irish. If the character is called upon to "fake" the accent that's really theirs, it's a case of Lampshade Hanging, of the sub-type How's Your British Accent. Ooh, Me Accent's Slipping is quite common, and a few careless examples end up Not Even Bothering with the Accent.

This can also be done within the United States, if someone is expected to speak with a very distinctive accent other than their own, e.g. actors with "neutral" accents doing a Minnesota or Georgia accent.

Examples of Fake American include: