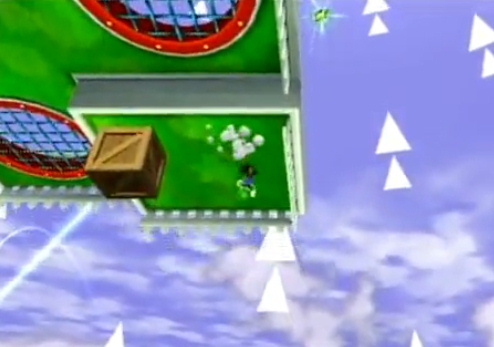 Gravity follows the arrows. Do you know exactly where to drop to be lined up with the little green star in the back? Neither do we.[1]

When you play a Video Game, you expect be able to use your skills as a gamer to beat whatever challenges the game throws at you. If the challenges requires a lot of skill, the game is hard to win. If it doesn't require much skill, it should be an easy game. However, some games that should be relatively easy are actually quite hard. It could be due to shoddy programming, a Game Breaking Bug, poor implementation of gameplay elements or time constraints, but the developers threw in something which makes the game harder, but which has nothing to do with the player's or AI's skills. This is fake difficulty.

The are five kinds of fake difficulty, in addition to the sub-category (The Computer Is a Cheating Bastard):

It is important to note that just because a gameplay feature is annoying and frustrating does not make it fake difficulty. For example, placing a large number of invincible minor minions between the player and the Plot Coupon is extremely annoying, but they can be avoided by skilled movement - thus, the difficulty is real.

Note also that fake difficulty is not inherently bad. If used subtly, it can provide a satisfying challenge in cases where the AI might be lacking. However, it is obviously preferable for the AI to provide a challenge by playing well than by getting special advantages from the programmer. Moreover, some games (notably Platform Hells and Retroclones) get the majority of their comedy/nostalgia from Fake Difficulty and is much of the appeal of them - Dungeons & Dragons' most popular module is packed to the brim with Fake Difficulty and attempts to reduce it have caused complaining from the fanbase.

Fake Difficulty was prevalent in many older games, when developers were still learning about how to make fair challenges. When people realized that sometimes, the game was hard for all the wrong reasons, they decided to make it more of a fair challenge. The unfortunate side effect are that newer games seem easier in comparison merely because they're a fairer challenge. There are plenty of other reasons for this (Such as players being aware of some persistent forms of Fake Difficulty and making sure to avoid them) but that's another article entirely. It still does exist today, mind you.

Difficulty due to technical aspects of the game

Outcome due to factors beyond player control

Punishing decisions made long before one could reasonably understand the ramifications

Retrieved from "https://allthetropes.org/w/index.php?title=Fake_Difficulty&oldid=1493616"
Categories:
Cookies help us deliver our services. By using our services, you agree to our use of cookies.