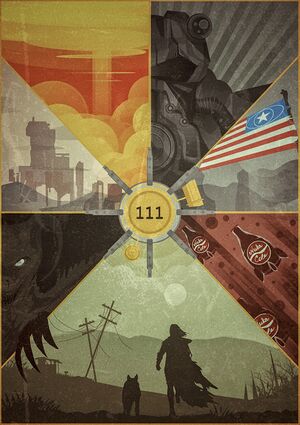 Fallout 4 is an open world action role-playing video game developed by Bethesda Game Studios and published by Bethesda Softworks. The fifth major installment in the Fallout series, the game was released worldwide on November 10, 2015 for PC, PlayStation 4 and Xbox One.

Sanctuary Hills, Massachusetts, circa 2077 is a pleasant place to live in. You've done your service to your country and are just happy to settle down with your spouse and newborn son. And despite the worries of the age, it seems at long last that peace has finally come. That is, until the Great War finally arrives, forcing you and your family to flee to nearby Vault 111, making it just in time...only to be frozen as part of the Vault's experiment. By the time you wake up, your family's gone, centuries have passed, and you're desperate for answers in what's left of the old Commonwealth.

Fallout 4 is set in a post-apocalyptic Boston in the year 2287, 210 years after a devastating nuclear war, with a prologue set on the day the bombs fell in 2077. Gameplay is similar to Fallout 3, though significantly builds on the improvements introduced in Fallout New Vegas. The player completes various quests and acquires experience points to level up their character. With first- and third-person perspectives available, players can explore the Fallout 4 open world setting at will, allowing nonlinear gameplay. Companions can accompany the player on their voyages to assist them in battles and help with scavenging. Players have the ability to construct and deconstruct buildings and items, and use them to build a settlement, which can attract and be inhabited by non-playable characters.

Fallout 4 was rumored several times prior to the game's announcement. The game was announced on June 3, 2015, and the first gameplay footage of the game was shown at Bethesda's own conference at the 2015 Electronic Entertainment Expo. The game features full voice acting for the protagonist, a first in the series.

On February 16, 2016, Bethesda revealed details on the planned DLC for Fallout 4. The first of these, Automatron, was released on March 2016. This was followed by Wasteland Workshop in April, Far Harbor in May, Contraptions Workshop in June, Vault-Tec Workshop in July, and the final DLC, Nuka-World, in August.

Tropes used in Fallout 4 include:
Retrieved from "https://allthetropes.org/w/index.php?title=Fallout_4&oldid=1745393"
Categories:
Cookies help us deliver our services. By using our services, you agree to our use of cookies.