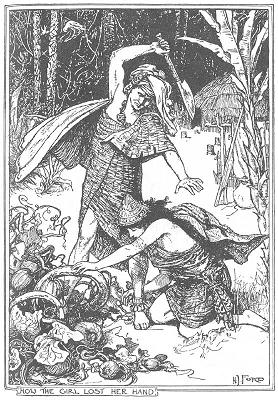 A nice little Fairy Tale: a brother is about to lop his sister's hand off.

Violence is funny, as long as no one you like gets hurt. Unrealistic Slapstick violence is funnier still, perhaps because it's clearer it can't happen to the audience, but sometimes shows cross the line.

Maybe the programme shows the consequences of violence a little too vividly, maybe the designated target has become too sympathetic. Whatever the reason, the result is prime Nightmare Fuel.

If the violence leads to actual death, it's a Family-Unfriendly Death.

Examples of Family-Unfriendly Violence include: