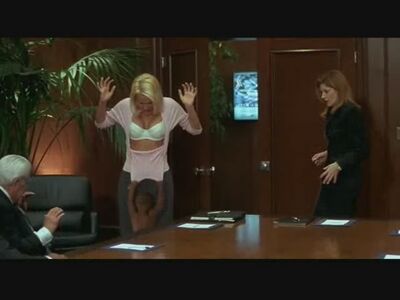 A Fanservice Extra suffers Clothing Damage for your viewing pleasure.

Sometimes Fan Service is provided not by a major or supporting character, but instead by a very minor character who doesn't even appear in the story until almost the very moment of Fan Service. On the screen for a grand total of anywhere from 2 seconds to 2 minutes, she will provide the male audience with a Wardrobe Malfunction, a Marilyn Maneuver, a Panty Shot, or some other specific type of Fan Service. She will then never be seen or heard from again in the story. In essence, she is a glorified extra hired for the express purpose of providing the film with a precious few extra seconds of gratuitous T&A, hence the trope name.

If she receives any billing at all in the credits, it will be way, way down the cast list as "Buxom Waitress", "Skinny Dipping Cheerleader", "Showering Pageant Contestant #2", or some similar matter-of-fact description.

Fanservice Extras rarely play characters with actual names, much less actual lines of dialogue. Her presence is solely to provide titillation for the audience, and on some occasions, to play to a particular fetish a viewer might have. In fact, for the amount of screentime taken up, her scene will often turn out to be surprisingly memorable...

If a film or TV show has a scene set in a strip club, then any dancers on stage will probably be Fanservice Extras by default.

This trope is Ms. Fanservice minus the necessary character development and screen time.

Most commonly found in comedies, but sometimes also in action movies and horror movies. In Slasher Movies, she often falls victim to Death by Sex, and may be credited as "Fleeing Slumber Party Victim", or something similar. If the horror aspect of her scene is played too seriously, however, Fan Disservice may result.

While this trope exists mostly in "moving" media, Fanservice Extras do appear in manga and comics also. They will usually appear in only one panel, and will be drawn to a level of detail not normally seen in the rest of the panel.

Examples of Fanservice Extra include:

Retrieved from "https://allthetropes.org/w/index.php?title=Fanservice_Extra&oldid=1957514"
Categories:
Cookies help us deliver our services. By using our services, you agree to our use of cookies.