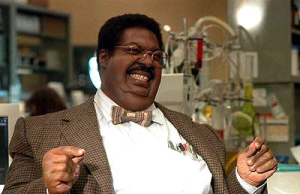 When a major actor receives a role that requires obesity, there are two options: go on a high-calorie diet as Robert DeNiro did for Raging Bull and The Untouchables or Vincent D'onofrio did for Full Metal Jacket, and go through the effort of losing that weight afterward - or just wear a Fat Suit. Sometimes a role requires the character be overweight for just a brief period in a film, and to gain and lose weight in such a rapid time is impossible.

Fat Suits are sophisticated three-dimensional prosthetic makeup that go far beyond just putting a pillow under one's shirt. It requires painstaking facial makeup to provide realistic jowls and multiple chins, in addition to the suit, which covers the arms, legs, breasts and belly.

Sometimes, a character, who is otherwise supposed to be skinny, athletic, or at least normal-sized, will don a Fat Suit as a plot point, a disguise or just low comedy.

Not to be confused with the Big Suit.

Examples of Fat Suit include:

Am I the only one wondering how he's gonna fit through the launch window in a fatsuit?

Retrieved from "https://allthetropes.org/w/index.php?title=Fat_Suit&oldid=1511235"
Categories:
Cookies help us deliver our services. By using our services, you agree to our use of cookies.