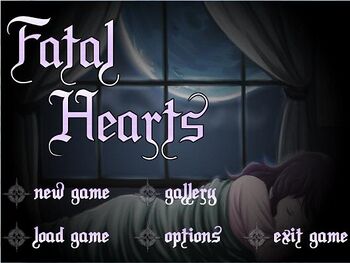 Fatal Hearts is a visual novel from Hanako Games, an independent American group of small time game makers. It is a heartrendingly sad and romantic coming of age story about Christina, a bored teenager wasting her summer with her friend Lucy. When young women begin to turn up murdered in abandoned areas, and Christina happens across one of them, her life is changed forever as she is drawn into a strange world of vampire cults and werewolf clans. If the player makes the right choices, Christina can pair up with (almost) anyone, but if you play your hand wrong, you might just be killed by your former allies.

Crazy cultists, immortal vampires, cuddly (or deadly) werewolves, and it's way too easy to kill off your character. Seriously.

Tropes used in Fatal Hearts include:
Retrieved from "https://allthetropes.org/w/index.php?title=Fatal_Hearts&oldid=1466960"
Categories: