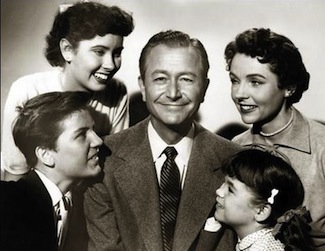 The story revolved around the various issues the family got involved in. It is also noteworthy for being a complete subversion of the trope it supposedly represents. The radio show it was based on (and which featured a completely different cast apart from Young) wasn't Father Knows Best but Father Knows Best? Note the question mark. And in the TV series the mom, just like today's sitcoms, often got the better of her husband and son. In the radio show she was definitely closer-to-Earth.

This is the show that put Robert Young onto the map as a famous actor, long before his portrayal as a doctor and the title character in Marcus Welby, M.D..

Since the show was made during the 1950s, it never dealt with anything controversial.

A pair of reunion movies featuring the TV cast were made in 1977.

Retrieved from "https://allthetropes.org/w/index.php?title=Father_Knows_Best&oldid=1703494"
Categories:
Cookies help us deliver our services. By using our services, you agree to our use of cookies.