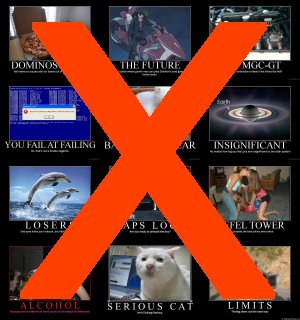 Text in images
The easiest way to make image captions inaccessible to translators and screen readers.

If you've ever been in an American school or office environment, you've seen them: Posters encouraging the viewers to Reach For The Stars and to Never Give Up. Invariably, these lessons are accompanied by a cute picture or a vaguely inspirational stock photo. Are you feeling motivated yet?

Thus, the Fauxtivational Poster was born in response. It takes diverse forms, all united in their use of the poster medium to play with the Motivational Poster. Some posters present a straightforward lesson, but exaggerate the Glurge to nonsensical levels. Others preach a patently ridiculous (or just particularly cynical) lesson. Still others use the Motivational Poster format to make a humorous statement about a completely different subject.

Successories is probably the most popular brand of Motivational Posters (inspiring many imitators); consequently most parodies follow the same layout that Successories popularized: A stock photo on a black background, with a one-word title in large text below, with a pithy saying or quote beneath that.

An Undead Horse Trope: Straight motivational posters are still in use in schools, offices, and some gyms (and prisons), but the parodies and subversions far outweigh straight uses everywhere else. Therefore, it's a classic example of the Weird Al Effect. Even when media does use straight Motivational Posters, it's almost always as an ironic counterpoint to some soul-crushing environment where the poster is hanging.

Parodies are often called "Demotivators" or "Demotivational Posters", regardless of their content; the name is taken from a series of posters by Despair Inc with genuinely demotivational themes. You have been warned.

Not surprisingly, there are various websites that let you make these poster patterns very easily. Which is why there are a ton of them floating around the internet.

Compare "Faux To" Guide. A specific type of Detournement.

Examples of Fauxtivational Poster include:

Retrieved from "https://allthetropes.org/w/index.php?title=Fauxtivational_Poster&oldid=1743097"
Categories:
Cookies help us deliver our services. By using our services, you agree to our use of cookies.