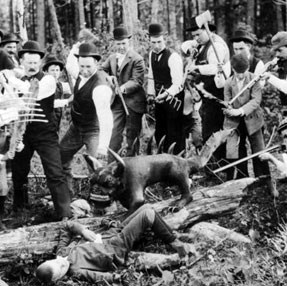 The terrible Hodag, captured on film (allegedly) by Eugene Shepard, 1893.

The Fearsome Critters are a group of mythical beings from the stories told by European colonists to North America, mainly in New England (naturally) in the 19th and early 20th centuries, but there are stories of Fearsome Critters spread all across the country, including several notable "species" specific to the southwest. Fearsome Critters are notable for being described primarily by their behavior, not by their appearance, and for often having names that reflect that (Hide-Behind, Come-at-a-Body, et cetera), meaning that what they actually look like fluctuates wildly from tale to tale in the style of Paul Bunyan—whose loyal friend and partner, Babe the Big Blue Ox, might well be a Critter himself.

Genuine belief in the Fearsome Critters was never widespread; even in most of modern America they're relatively obscure, and almost completely unheard-of in other parts of the world. They originated, variously, as exaggerated accounts of native fauna unfamiliar to the European travelers who described them and as a humorous means of describing the strange goings-on in the woods by lumberjacks, carnies, and other outdoorsy types. Fearsome critters are not cryptids, nor are they associated with Native American faiths; the Jersey Devil, the sasquatch and the Wendigo are not Fearsome Critters.

See also: Yowies and Bunyips and Drop Bears, Oh My!

Some of the notable Critters are: 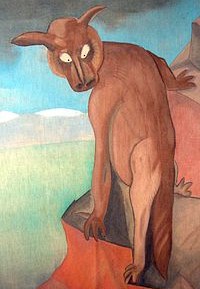 Known by a myriad of other names, including the Guyanoosa and Sidehill Gouger, the Guyascutus is a terrible predator variously described as being like an alligator covered in protective plates, like an armadillo's, or like a deer with the ears of a rabbit and a mouth full of fierce teeth. Its most notable feature, however, is that the legs on one side of its body are much shorter than the ones on the other, so it can move about easily on the steep mountain slopes where it makes its home; therefore, to escape a Guyascutus, one need only run onto even ground. The creature, with its mismatched legs, will be unable to follow.

The most famous legend of the Guyascutus involves an old carnival grift. A traveling carnival show rolls into town, claiming to have wild animals from all around the world on display—including, incredibly, a live Guyascutus. The people paid their fees and flocked to see the alleged beastie, at which point the leader of the plan would run before the crowds, looking desperate and beat-up, claiming that the creature had escaped. The people, terrified, would immediately run to their homes, leaving the carnival troupe to ride away with their "earnings". 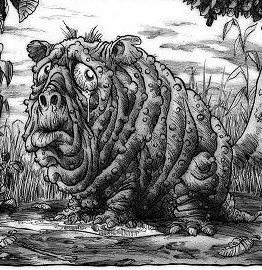 Perhaps the most famous of the bunch (and the subject of more than one popular song), the Squonk is a miserable animal, "The most melancholy of creatures", that allegedly inhabits the coniferous forests of northern Pennsylvania. Because its skin is covered in warts, blemishes, blisters and abrasions, the Squonk is disgusting to look at—and it knows this, which is why it hides underground during the day, hoping not to offend any other creature with its hideous appearance. At night, the Squonks all come out into the open and openly weep; the strange sounds lumberjacks and other frontiersmen heard in the forest at night were attributed to their crying.

The Squonk also has a legend surrounding it. This one tells of a man named J.P. Wentling, who wanted to capture a live Squonk and prove its existence to the world. One night he succeeded, trapping the creature in a bag; but when he took it home and opened the bag to show his friends and family, he found nothing but water inside. The Squonk, more miserable than ever, had dissolved into a pool of its own tears. 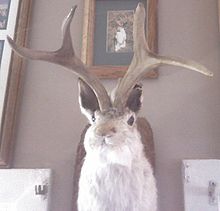 The most famous southwestern Critter, popular in Texas, New Mexico, and southern California. The Jackalope is a wild hare or jackrabbit with the antlers of a deer, reportedly very difficult to catch or even to spot (though U.S. President Ronald Reagan did claim to have caught one once—purely as a joke, we expect). Jackalopes are highly elusive and will run at the very sight of a human, but at night, they all gather in the desert and sing harmoniously with their strange, enchanting voices. Of course, that's only one interpretation; it's more uncommonly described as a vicious Killer Rabbit. To this day, the "stuffed Jackalope" is a fairly common sight in southwestern bars and taverns.

Sadly, any reported Jackalope sighting is much more likely to be a regular rabbit afflicted with the shope papilloma virus.

The Hodag Still quite popular in Wisconsin, where it makes its home (and particularly in the city of Rhinelander), the Hodag is a fierce beastie with "the head of a frog, the grinning face of a giant elephant, thick short legs set off by huge claws, the back of a dinosaur, and a long tail with spears at the end". Several hoaxes regarding the animal, from the way it terrorized the lumber community to its eventual capture (using chloroform and dynamite, no less!) were perpetrated in the late 19th century by the prankster Eugene Shepard. Today, the creature is more or less a fondly-regarded local curiosity; it's even become the mascot of Rhinelander High School.

Others Lesser-known (but no less Fearsome) Critters:

Retrieved from "https://allthetropes.org/w/index.php?title=Fearsome_Critters_of_American_Folklore&oldid=1704116"
Categories:
Hidden category:
Cookies help us deliver our services. By using our services, you agree to our use of cookies.