Everything About Fiction You Never Wanted to Know.
Jump to navigation Jump to search
/wiki/Federico Fellinicreator 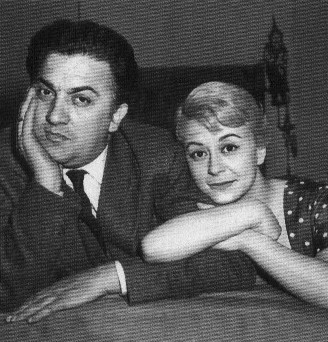 Fellini and his wife, Giulietta Masina, his sometimes leading lady

"The Imagination of a man like Fellini is so extraordinary that it seems more real than reality itself".
—Tullio Kezich, author of Federico Fellini: His Life and Work, in the documentary Fellini's Homecoming

Federico Fellini (1920-1993) was a famous Italian film-maker. Today, he's most likely known for his "Felliniesque" style. That is, magical realism, but not enough to qualify. Surreal, but not too surreal. Strange, and yet, highly sedate.

But above all, it is generally considered that Fellini is one of the more important film-makers to come out of the neo-realist movement, eventually abandoning those roots and moving into the world of movie artifice.

Very few heartily and readily agree that his color films are important, though in recent times, some such as Juliet of the Spirits, Satyricon, his version of Casanova, And the Ship Sails On, and Intervista are gaining stature as being the most mature works.

While his films are what make the artist, his life was equally fascinating, living through the time of the fascists, becoming a journalist and cartoonist, writing scripts with the neo-realists, becoming a celebrity in Italy by creating the morally "indecent" La Dolce Vita (where the term Paparazzi comes from), supposedly having many affairs (including one with his actress Sandra Milo), taking a bit of experimental LSD under supervision by Doctors and remarking that he was "unimpressed" with the experience, surrounding himself with clairvoyants and mystics, adopting the principles of Carl Jung, improvising large chunks of a movie even when there was a script, mistreating Donald Sutherland on the set of Casanova (apparently, he claimed to have gained rights to film the story by having a seance with the spirit of the great lover himself), and shooting a movie on a cruise boat with almost no water where the ocean was made of plastic and characters remark that the sun looks so beautiful it must have been painted on the wall.

Some of his works are included here: