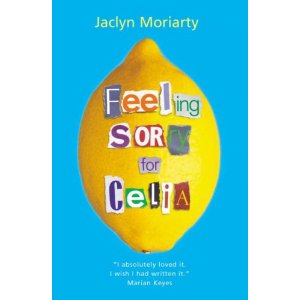 Dear Ms. Clarry,
It has come to our attention that you are incredibly bad at being a teenager
I mean, take a look at your bedroom.
You haven't got any posters on your wall. (Don't try to tell us that picture counts. A kitten drowning in a strawberry milkshake? Designed by your mother as an ad for carpet cleaner? Give us a break.)
You have a chain of old Christmas cards hanging from your curtain rod. The only makeup you have is banana-flavored lip gloss and it's melting all over your Little Mermaid quilt cover. (Actually, we don't think that lip gloss counts as makeup at all.)
Not to hurt your feelings or anything, but you're an embarrassment to teenagerhood. Therefore, could you please climb into the refigerator and wait very quietly until your teenage years end?
Thank you.
Yours sincerely,
The Association of Teenagers


P.S. You also don't seem to understand how to get a snow tan. You look like a slice of watermelon.
—Elizabeth's first letter

The protagonist Elizabeth Clarry has just learned that her new English teacher is beginning a pen-pal program between her class and a neighboring high school to rekindle the "Joy of the Envelope". Her mother, an advertising exec who takes her job very seriously, is so busy with her job that she only has time to talk to Elizabeth via sticky notes left around their kitchen, and takes every opportunity she can to pick Elizabeth's brain for ideas for new advertising campaigns. And now, her (literally) distant father is moving back to Sydney after several years of living in Canada. That'd be fine, except he wants to "bond" with her by taking her out to expensive restaurants (to "culturally educate" her) and generally be embarassing.

And then there is the eponymous Celia, who has been Elizabeth's best friend since childhood. Elizabeth is the practical, independant type. She's does long-distance running, takes care of her dog, Locche, and makes the meals for herself and her absent mother. Celia is the Cloudcuckoolander, the enchanting fairy-like one who's always trying new things out of boredom. Partway through the book, we learn that Celia has run away and joined the circus. Elizabeth is left alone, worrying if Celia will ever come back, as well as a host of other problems.

The book, instead of being witten in narrative form, is written as a series is a series of letters, notes, and postcards. Many of these come from imaginary organizations like The Cold Hard Truth Society, The Association of Teenagers, and The Society of People Who Are Definitely Going to Fail High School (and Most Probably Life as Well!).

Christina, the girl that was picked to be Elizabeth's pen-pal, is spunky, no nonsense, and a sympathetic ear to Elizabeth's problems. Although they are both wary of each other at first, especially since Elizabeth goes to a private school and Christina likes oatmeal, they soon become friends. They share stories of their families and musings on life. With Christina's support, Elizabeth begins to accept the changes that are happening in her friendship with Celia. Which is pretty spectacular considering that these are two people who haven't spoken face-to-face for roughly 95% of the book.

Tropes used in Feeling Sorry for Celia include: