Everything About Fiction You Never Wanted to Know.
Jump to navigation Jump to search
/wiki/Felicia Daycreator 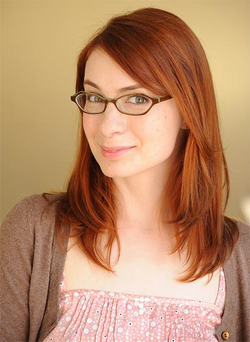 She is your new god.

I don't discuss my process."

Kathryn Felicia Day is an actress, gamer, independent filmmaker, and oh yeah, total nerd. Incredibly adorable. Her best known television role was the Potential Slayer Vi on the final season of Buffy the Vampire Slayer; she appeared as Penny in Dr. Horrible's Sing-Along Blog and stars as Cyd "Codex" Sherman in the popular web series The Guild (which she also created and writes).

Of course I romance myself. I've always said, if I had to make out with my clone, I would.

Thank you to Eureka craft service for having custard pie, because as a Southerner, I'm aware this is the superior pie

Whoa, I'm getting so narrow I can't even keep my finger in here. *realizes what she said and loses it* That was not meant to be dirty!